Yamilet went through a season where she was paralyzed by fear, panic attacks, and was diagnosed with a series of mental disorders (OCD, PTSD, depression, etc.) Her husband recalls how there were moments when she would go into a grocery store and run out as quickly as possible because of a panic attack. She went from having a life where she felt like she had it all, to falling into a pit of deep darkness and fear. Psychologists gave her a wide range of treatments, yet none of them helped. Instead, she experienced that she was descending deeper into a pit of despair and depression. Dark thoughts plagued her to such an extent that she found herself contemplating suicide at moments. It was during this deep valley that she started calling out to Jesus Christ, and He brought around a complete change. 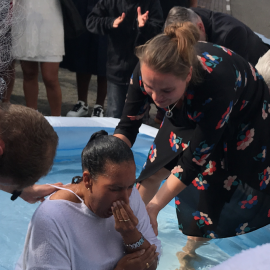 Yamilet found a testimony on YouTube of a man telling how Jesus delivered him from depression. She listened and prayed the prayer he told his listeners to pray. Nothing spectacular happened at that moment, but the journey to healing did begin then. She asked Jesus to send two people to her home who could pray for her. Within a week, a Christian woman contacted her and asked if she could come with someone else to pray for her. This visit started bringing her closer to her restoration and healing.

For quite a while, she had been doing a Bible study with a group of Jehovah's Witnesses. Yet, she saw that they had absolutely no power nor faith to believe in healing prayer. She stopped attending their meetings and started studying the Bible and praying alone at home. God’s Spirit began speaking to her through scripture, as well as through dreams and visions. God told her that she needed to find other believers who could help her, and He started telling her to contact Pastor Mateo (Matthew). She contacted me (Matthew) and the most amazing thing took place. 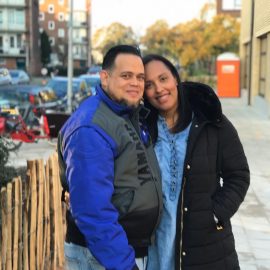 Yamilet standing with her husband

We (Matt and Femke) visited her at her home, and the moment we prayed for her, the Holy Spirit came down and baptized her with power. This Holy Spirit power encounter totally changed her vision of herself and her life. Within two weeks, she was baptized, and God continued doing a very profound work in her life. She is now free from all panic attacks, depression, and diagnosis which psychologist had given her.

Yamilet is also a faithful worker with Femke, helping people in Amsterdam’s Red Light District. She and her husband have become leaders and pillars of our church, Iglesia Vida Nueva. Her testimony, and now her new ministry, are developing and helping many other people come from darkness into the light. Yamilet and her family are just one of the many families we are honored and privileged to serve here in Amsterdam. Thank you so much for enabling us to serve people like Yamilet to come from the kingdom of darkness into the wonderful kingdom of Jesus Christ. Your prayers and financial support allow us to invest our lives into the lives of Yamilet and so many more people like her. THANK YOU!!

An exciting development is a new ministry project we are undertaking called Freedom Market. This will become an online platform where you can purchase jewelry and other articles and services to help people get out of prostitution and to stop human trafficking. The story of this ministry began a couple of months ago when an IPHC church from Australia sent money to us, asking us to invest it in helping someone get out of prostitution. One woman who works six nights a week in prostitution and six days a week at a local market selling jewelry was found. We are now helping her and her husband sell their jewelry so that she can get out of prostitution ASAP! If you would like to donate to this project, you can send money to project number 35101p Set the Captives Free.