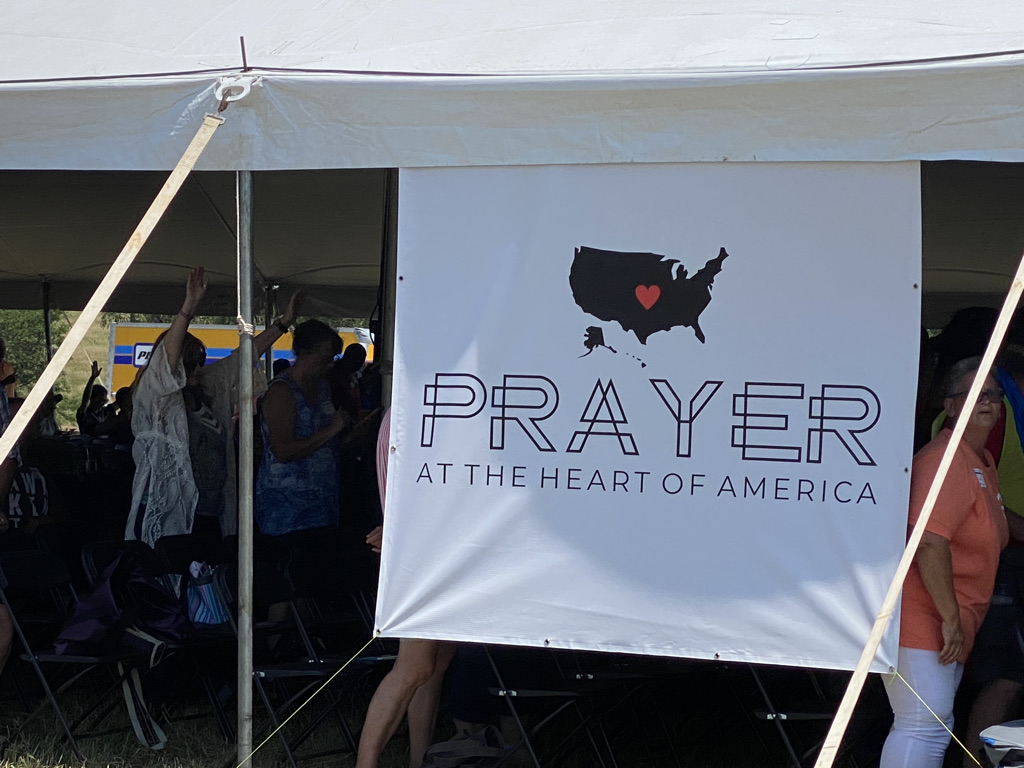 From Pastureland to Altar

More than 1,500 people gathered near Lebanon, Kansas, last Friday to pray for America “at the heart of America,” the geographical center of the contiguous 48 states.

Prayer at the Heart of America began with a intercessory prayer call from P. Douglas Small, the IPHC’s prayer consultant and president of Project Pray. More than 30 years ago he imagined people arriving at the center of the United States along prayer routes from every compass point. He even suggested that some might encircle the US, praying as they came.

A group of IPHC and other church leaders took up the prayer route challenge. In the end, Evangelism USA (EVUSA) helped to organize 8 prayer routes plus the 4 Corners Prayer Ride (4CPR) that was organized by Mission M25. The prayer caravans left their origin places in time to stop at landmarks and state capitals along their way to pray.

On Wednesday, July 21, as the prayer routes entered the last stages of their cross-country journeys, a tractor trailer delivered the 3,000-seat tent. At the same time, volunteers from around the country began prepping the site for the arrival of hundreds of visitors.

"We are thrilled to have such a phenomenal team of volunteers and workers," said Bishop Garry Bryant, executive director of EVUSA. "They have come, literally, from across the nation to be a part of this undertaking, to make a 60-acre pastureland into an altar."

In addition to the "altar," the surrounding field included A broadcast production team also set up to provide streaming coverage via websites and Integrity Television's Roku channel. (The broadcast continues to be available at the America's Prayer Meeting website.)

Visitors arrived in Lebanon beginning Friday morning, their caravans and RVs moving from asphalt to gravel to grass. Volunteers from the Oklahoma City area. The program began at 2PM with worship and a video welcome prepared by Doug Small. As visitors continued to arrive throughout the afternoon, the crowd swelled and filled the countryside with music and praise.

The event was organized by an interdenominational team, and that diversity was represented among the visitors as well. In addition to a large number of IPHC attendees, the crowds included participants from multiple denominations, many independent churches, and ministries.

Among the visitors were two representatives of the Congregational Holiness Church (CHC): Bishop Scotty Poole, just elected General Superintendent of that denomination, and Dr. Matthew Turner, who serves as administrator of the CHC's Mission USA.

"It just dropped in my heart that we needed to come," Bishop Poole said. "This is an event that helps us understand what we should do as a church in America."

What organizers called an “encounter” rather than an event continued through multiple movements of prayer and worship, including repentance for national and personal sins, a state-by-state appeal for revival, and prayer for the lost.

Find additional news coverage of Prayer at the Heart at Charisma, CBN News (before and after), and the Kansas City Star. Watch the full event at America's Prayer Meeting.