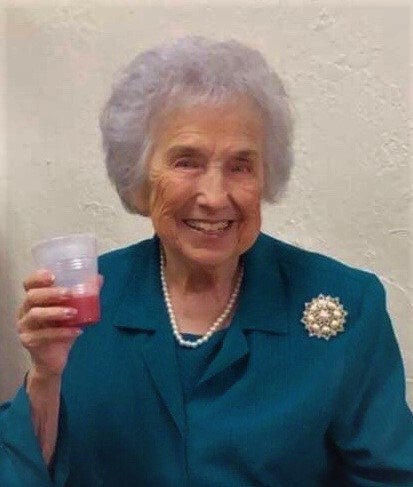 Charlene Helen West was born the third daughter of the Rev. Charles Henry and Bertha Lena North.  In making her the namesake of her father, without realizing it, they were naming her as the one upon whom the mantle of a long line of ministry would fall.  She was married to the Rev. Russel B. West in 1950 and from this union were born four children:  Paul, Kathryn known as Kathy, Joseph, and Philip.  In 1960 the Lord called Charlene to preach, and she and Russel formed a successful ministry team to advance the work of the Lord in various churches.  The Lord saw fit to promote Russel to his heavenly reward on January 7, 1969 while pastoring in Bakersfield, California.  Since Charlene had studied university Spanish, Russel, just before his home-going, had volunteered her services to chaperone a Youth in Action Team to Costa Rica.  Although her activities were greatly changed, the church board felt she should accept this invitation as it was something her husband had wanted her to do.

It was after this trip that the Lord renewed a vision He had given her in 1960, where she had seen herself going south through Mexico, Central America, and on to South America.  She volunteered her services to the World Missions Department of the IPHC, and began a career of service which lasted 22 years in Costa Rica, Venezuela, Colombia, and other parts of Latin America as a team teacher for advanced ministerial training.  She was privileged to see the development of outstanding national leadership during this time and decided to return to the United States.  She was immediately offered a position with the Evangelism Department to become the first director of Hispanic and Intercultural Ministries of the denomination.  She held this position for seven years, when God again changed her work ministry schedule.

She was at the General Conference with the elements of communion in her hands, when God spoke clearly:  I am changing your job.  She waited on the Lord to give her the information she needed about her next assignment, and one day it came:  to establish a Hispanic church that would train ministers to be church planters.  She began Centro de Celebration and pastored it for 13 years.  By this time, she was past 81 years old and decided she needed to let someone younger take the reins of this very wonderful church.  After retiring from the pastoral work, the Lord anointed her to write, and she has 15 published books, some in English and some in Spanish.  As she continued to teach and train through her books, her great joy was to see her disciples catch the vision she has projected to plant churches and extend God’s kingdom.

While ministry goals have been important to Charlene, she had counted her own children as the most precious gifts God has given her.  In her old age, they have stood by, taking care of the home, making her joyful with flowers, dinners out, very special cards, etc.  She leaves her son Paul and his wife, Kay, her daughter Kathy and her husband, Gary Petty, and her sons, Joseph and Philip. She also leaves her grandchildren, their spouses, and her great grandchildren.  Dear to her are her sisters: Evelyn Thurmond and Betty Cramp, as well as a host of other relatives and so many wonderful Christian friends.  As she says “goodbye” to you today, her desire is that each one of you will meet her just inside the eastern gate when you, too, will finish life’s journey to embark on one that has no end.

Funeral Services in English will be held at 10am, and in Spanish at 1pm on Saturday March 14th, 2020 at Centro De Celebracion Church located at 4725 NW 10th Street in Oklahoma City, OK.

The burial will be held at noon on Monday, March 16, 2020 at Longwood Cemetery located in Ponca City, OK.

On behalf of the World Missions family of the IPHC, we honor and remember, with gratitude, the life and ministry legacy of Charlene Helen West. We give thanks to God for her service as a revered and cherished missionary and minister of the gospel of Jesus Christ.

Rev. West was ordained as a career missionary by the World Missions Board in 1969. She served in Costa Rica from 1969 to 1977 and in Venezuela from 1978 to 1991: a total of twenty-two years. Her impact as a mentor and church planter still bears fruit today.  She is, without a doubt, one of the most beloved and effective missionaries that the IPHC has ever had serving on the field. I constantly meet men and women who consider Charlene to be their spiritual mother.

I was privileged to serve with Charlene in Evangelism USA when she served the General Church as the first director of Hispanic and Intercultural Ministries. She was a natural for this assignment. I also watched as she transitioned out of that role and back into the pastorate.  Charlene was one of the most effective church planters and ministry leaders that I have personally known in my lifetime!

Paul, Kathy, Joseph, and Philip, you have a wonderful heritage.  Know that you have been and will continue to be in the thoughts and prayers of your missionary family.  Scripture pronounces a blessing on those who mourn.  May that special anointing be extended to you as you mourn the earthly departure of your dear mother.

We are born, we live, we die. But, we also know that we are held in the hand of God, who knows no time and is eternal. We also know that nothing, not even death, will separate us from the love of God, which is in Christ Jesus, our Lord.