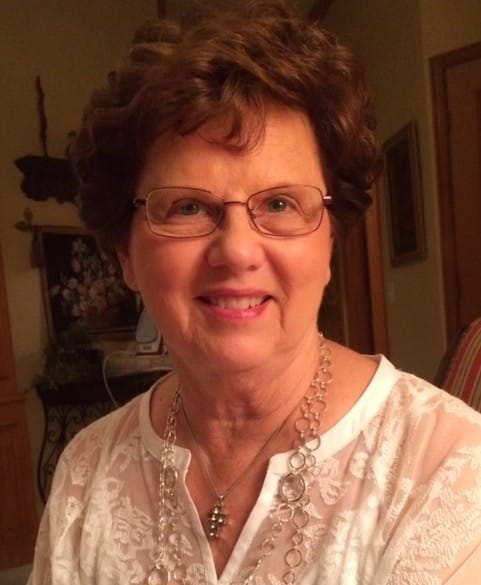 “Ellen (Coston) Howard was born August 23rd, 1941, in Oklahoma City to Louis Buford Coston and Ida Agnes (Spell) Coston. Ellen was the youngest of four children: Buford, Dora, Vernon and Ellen. Unfortunately, she lost her father when she was only 9 years of age.

Ellen graduated from Classen High School in 1959. She was an honor student and was active in music, performing in several Broadway musicals.

Ellen married Glen Howard just a few months after graduation at the age of 17. They welcomed their first child into the family 13 months later, their lovely daughter, Brenda, followed by three handsome sons over the next 12 years: David, Todd and Chris.

Ellen’s skills in music, typing and shorthand along with her knowledge in business made her an outstanding secretary. In the early 1970s, she served as the personal secretary to Southwestern College President W. R. Corvin.

Although a busy young pastor’s wife and mother in Rolla, Kansas, Ellen chose to return to college at Panhandle State University in Goodwell, Oklahoma. In 1969, she completed her Bachelor’s degree in Business Education and Home Economics at Central State University (UCO). Ellen was on the President’s Honor Roll and the Dean’s Honor Roll.

Ellen’s greatest love was her family and the ministry she and her husband experienced, serving on three continents as pastor, teacher and missionary.

Glen and Ellen moved to Manila, Philippines in 1983 serving as directors of Manila Bible Institute. Ellen was the business manager of the school and directed the fund-raising efforts.
In 1990, they moved to Budapest, Hungary serving as church planters and senior pastors of the International Church of Budapest.

Ellen was the secretary to the Board of Association of International Churches in Europe and the Middle East and traveled to meetings throughout Europe including Switzerland, France, Turkey and Germany. One of her fondest memories was a meeting in East Berlin shortly after the fall of the Berlin Wall. Ellen was riding alone in a large British cab through the Brandenburg Gate, thinking to herself that she was possibly the only person from Oklahoma to experience such a moment.

In 2000, Glen and Ellen returned to the states where Ellen served as an assistant to the Music Director at First Methodist Church in downtown Oklahoma City.

Ellen enjoyed reuniting with family and friends in the US, and established a beautiful home in Edmond, Oklahoma. She took every opportunity to visit her kids and grandkids, especially for any special family events.

Surrounded by her family, Ellen peacefully passed away on Saturday, December 10, 2022. Ellen is survived by her husband of 63 years, four children (Brenda and Ken, David and Lori, Todd and Carine, Chris and Becky), 13 grandchildren and four great grandchildren. She is mourned by a myriad host of relatives and friends, literally from around the world.”

Rev. Ellen Howard was licensed in 1957 and ordained in 1959 as a clergy member of the Oklahoma Conference, known today as the Heartland Conference. Years later, in August 1982, Ellen and her husband Glen were appointed as IPHC Missionaries and began their first field assignment in the Philippines in July 1983.

In The Simultaneous Principle, written by Dr. Frank Tunstall, you will find the following description of the Howards’ tenure of service in World Missions.

“Glen and Ellen Howard, from the Oklahoma Conference, arrived in Manilla in 1983.  He had served on the faculty of Oklahoma City Southwestern College and developed a thriving insurance business before he answered the call of the Spirit to be a missionary.  His experience and training made him a unique choice to lead urban church planting in the metro area.

The Luzon Conference experienced 50 percent growth in 1985, and several of the new churches were planted in Manila with the Howard’s oversight.  Their work continued until they returned to the US in 1992.”

Ellen was an exceptionally graceful and gifted lady whose commitment to excellence distinctly marked everything she did.

We honor and remember her life and ministry legacy with gratitude and give thanks to God for her service as a revered and cherished missionary and minister of the gospel of Jesus Christ, knowing that eternity will fully reveal the great Kingdom impact that missionaries like Ellen [Coston] Howard have made.

May the peace and comfort of the Holy Spirit sustain Glen, Brenda, David, Todd and Chris, as well as their respective families as they walk through this “valley of the shadow of death”!