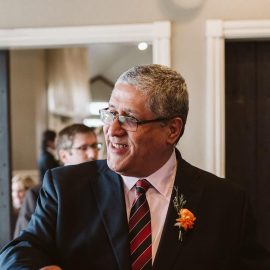 The IPHC World Missions Ministries family joins with countless others from around the world to celebrate and honor the life and legacy of Mauricio A. Salazar.

Mauricio, Lourdes (Lulu), Betsy, and Obed joined the WMM missionary family in November 1998 as national missionaries. Mauricio was a missionary sent from East Mexico IPHC Conference to Europe. Prior to this journey, Mauricio served as an assistant pastor of two churches in Mexico City and as the missions’ director of the East Mexico IPHC Conference for seven years. Global missions were his calling.

Mauricio sensed a specific call to the Muslim people. In February 1999, after a visit to Belgium, where over 200,000 Muslims lived, Mauricio felt confirmation from the Lord that Brussels was to be their first assignment. The Salazar family arrived in Belgium in June 1999 and immediately began engaging with the Muslim communities. This sparked the desire to establish a coffee house, Le Phare, as an outreach within these communities. Little did he know, the coffee house would allow them to encounter around 40,000 people from 105 different nations. They established more coffee houses during their time in Belgium, which resulted in multiple church plants and hundreds coming to know Jesus Christ as their Savior.

In August 2002, the WMM Council approved Mauricio and Lulu as full-time missionaries, and they continued their work in Belgium. Throughout their tenure in Belgium, Mauricio officially established the IPHC conference in Belgium, founded the Logos Bible School in Brussels - which continues to train up leaders to this day, and, together, planted multiple churches to minister to a culturally diverse nation. Services were held in Tagalog, the language of the Philippines; Russian; and Farsi, the language of Iran, to name a few.

Mauricio and Lulu transitioned their ministry from Belgium to Paris, France, in 2016. France is seen as the most gospel-resistant city in Europe. They successfully coordinated an event called Art Sur Scene, which was designed to “make the invisible visible” by using creative arts to connect the people of Paris with our Creator. This opened the doors for small groups that met twice a week and launched Genesis International Church in France. In three years, they preached, evangelized, discipled believers, and shined the light of Jesus amid so much spiritual opposition.

In the last nine months, Mauricio and Lulu returned to Belgium, where they were based in Antwerp, serving in pastoral ministry, discipling new believers, teaching Bible School classes, and reaching out to people trapped in the sex trade industry. Until this illness, Mauricio was actively preparing to return to the mission field.

Mauricio lived for and loved God with all his might. He was devoted to his family and made every moment count. He was determined to see as many people come to know Jesus Christ as possible. In a 2013 newsletter, Mauricio encouraged and challenged his readers by saying,

It is written in Psalm 90:12, “So teach us to number our days, that we may gain a heart of wisdom.”  Time is going by, and every day will have its own challenge in this year, yet we know that for those that love God, all things work together for good… Make it be your purpose to bring a smile and a peaceful heart to those around you and be an instrument of blessing in God’s hands.

In like manner, may we accept Mauricio’s charge to make every moment count for the glory of God, carry the light and love of Jesus everywhere we go, and be an instrument of blessing in God’s hands to the people we encounter.

We would be remiss if we did not recognize and honor some people who cared for the Salazar family during this time of grief: General Superintendent Dr. Doug Beacham, our Presiding Bishop, for leading the committal service. Bishop Beacham was privileged to serve the World Missions family for seven years as its Executive Director, and I know that missionaries hold a very special place in his heart.

Pastors Jeff and Verna Wilhoite and the faith family at Family Worship Center in Pulaski, Virginia, for hosting the memorial service for a member of their missionary family.

Bishop Preston Mathena, Rev. Larry Meadors, and the Appalachian Conference Executive Council for the support, generosity, and kindness that they have shown to the Salazar family. We are especially grateful to Rev. Meadors for honoring these members of your missionary family. I am grateful for his leadership and partnership as a member of the general World Missions Ministries Council.

Bishop Dayton Birt’s pastoral care for the Salazars while in Richmond, Virginia, was exceptional. Thank you, Bishop Birt.

And finally, Rev. Harold and Kathleen Presley - thank you for shepherding these missionaries who serve under your care in Northwest Europe. Your servant spirit and pastoral giftings have helped to guide them through this valley of the shadow of death. We are indebted to you.

We have received numerous calls from ministry partners of the Salazars who have expressed an interest in assisting Lulu with funeral and pending medical expenses. In response, we have established the Mauricio Salazar Memorial Fund – 37031P to serve the family’s financial needs. Thank you, as always, for your generosity and kindness. You are an exceptional faith family.

On behalf of the World Missions family,