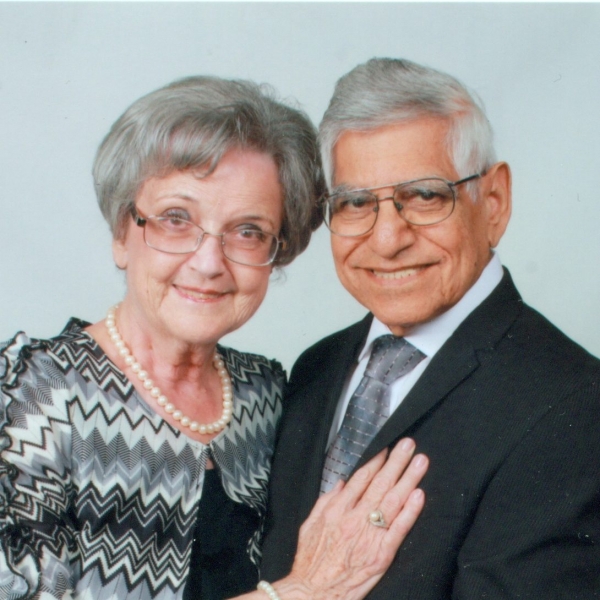 Rubén Pérez was born in Monterrey, Nuevo León, forming part of a Christian family with profound values of love, honesty, and fidelity.

Early in life, he discovered an attraction to plastic arts. He decided to master and work as a creative artist for publicity companies in Monterrey.

In 1964, he married Irma Rodríguez, and they were blessed by three children: Rubén, Haydeé, and Adalberto. Seven years later, a great trial came on the scene when his wife passed away, leaving him with three little ones. But he was faithful to God, even with this great loss.

On July 23, 1977, after five years of being a widower, he married missionary, Judith Firebaugh, with whom he shared ministry, teaching at Emmanuel Bible School, counseling, and of course, creating the official logo and other publicity items for Emmanuel.

Over the years, Rubén and Judith were able to itinerate in the USA, informing of God´s work in México and, in particular, raising funds for Emmanuel.

In 2002, they suffered the loss of Rubén, Jr., but even so, his faith did not falter, and he was a testimony to many people.

After retiring from secular work, he accepted the pastorate of a church, and together Rubén and Judith served for five years.

Rubén was a loving husband, grandfather, and a living testimony of God´s grace and blessing in his life. The last great test was of him having to submit to hemodialysis for the last five years of his life. However, he never lost his great sense of humor - sharing smiles and interesting stories to the doctors and nurses. He took advantage of each moment to share his faith in Jesus Christ to other patients.

On July 18, God decided to call him to His presence, receiving a firm and faithful servant.

He left behind his wife, Judith, who took care of him with profound love until the last moment; his children: Haydeé and her husband, Miguel, and Adalberto and his wife, Sabdi; two sisters; and his grandchildren, Xanat, Míkel, Rubén Elías, and Valeria.

His family recognizes him as the man who is described in Psalm 1. He was blessed because he did not walk in the counsel of the ungodly, nor did he sit in the seat of the scornful, but his delight was in the law of the Lord, and in this law, he meditated day and night. He was like a tree planted by the rivers of water which brought forth fruit in his season. His leaf did not wither and everything which he did was prospered by the Lord.

Rubén Pérez fought a good fight; he finished the course; he kept the faith, and he has received a crown of justice.

"While Rubén Pérez was not a Career Missionary, like his wife Judith is, he became a revered and cherished member of the IPHC’s missionary family as he labored faithfully alongside of Judith for the past 43 years. Rubén was the personification of a Christian gentleman.  He was always gracious, courteous, and kind. The words of Paul the Apostle in Colossians 4:6 [ESV] come to mind when I think about Rubén: “Let your speech always be gracious, seasoned with salt, so that you may know how you ought to answer each person.” World Missions Ministries will be forever indebted to Rubén for the investment that he made at Emmanuel Bible School in Mexico.

Judith, we extend our deepest condolences to you and your family as you mourn Rubén’s earthly departure. We, however, rejoice in the assurance that, as a disciple of Christ Jesus, Rubén has now entered the Church Triumphant!

I told someone recently that Judith Pérez is irreplaceable in Mexico. She is an extraordinary missionary and inspiration to me personally.

Thank you for joining us in praying for Judith and her family as they walk through their ‘valley of the shadow of death.’