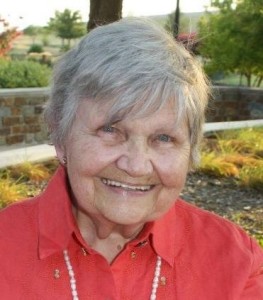 “Velda Ruth Cunningham Hough, 83, of Oklahoma City, OK, left her earthly life to join the throngs of the redeemed on March 12, 2016.

Velda was born in Calvin, OK on June 30, 1932, the second of eight children. She graduated from Wewoka High School and continued her education at Southwestern Christian University. In the 1960’s, Velda returned to her studies, earning a degree in Spanish and Music as a double major from the University of Southern Florida.  She completed her Master’s Degree in Education in 1974 at Pan American University in Edinburg, Texas.

Velda was married to Robert H. Hough; they were married 39 years, serving as pastors in Eastern Oklahoma and Florida, and as missionaries to Cuba and Mexico.  They also gave several years of service to the Texas Conference of the IPHC.

Velda worked as a teacher, missionary, and a Special Ed Diagnostician. She was a musician and enjoyed making music on a variety of instruments, raising a garden of flowers, learning new languages, and spending time with her family. She was also actively involved in teaching Bible classes wherever invited as well as English as a second language.

Memorial donations may be given to to World Missions Ministries, P.O. Box 270420, Oklahoma City, OK 73137. Designate Project ‪#‎54004P Velda Hough. Or donate online here. All donations will go to Emmanuel Bible College in Monterrey, N.L. Mexico where Velda taught as a missionary.

The family of Velda Hough wishes to thank the Deacons and Deaconesses of Crown Heights Christian Church who were faithful to visit and send cards and remembrances, and countless others who have shown Velda and her family loving and prayerful support. A “Celebration of Life” service was held on March 16, 2016 at the Crown Heights Christian Church, conducted by Pastor-Reverend Aaron Krueger and Rev. Bob Ely.”

World Missions Ministries Division would like to pay special tribute to Velda Hough’s life. As we are deeply saddened and grieved by her death, we rejoice in the eternal life she is now experiencing with our Lord and Savior Jesus Christ. We are grateful for the true gift that she was to the IPHC family and the Kingdom of God.

Velda’s legacy will undoubtedly be carried on by the continued ministry in Cuba and Mexico, especially the work of Emmanuel Bible College. The World Missions Ministries Division staff in Oklahoma City and the IPHC missionary family extend our prayers, sympathy, and support to all who knew and loved her.