What is the definition of love?

Some say love is an affection, chosen and unconditional. Others say it is an emotional drawing toward an individual. However, in the minds of millions around the world, the definition of love encompasses brainwashing and manipulation.

My eyes were opened and heart broken for those who fall victim to sexual exploitation, after visiting a safe house two years ago in Pennsylvania. I had a heaviness on my soul for those victimized by sex trafficking prior to visiting this safe house. However, the things that I learned during my stay there broke my heart in an unmendable way.

I always had a preconceived notion that prostitution and sex trafficking were two separate matters. However, when I arrived to this place, I quickly learned that they are generally one in the same. After speaking with the women living in the safe house, I found that those who prostitute themselves in red light districts are reporting to someone.

While I vaguely understood, what I did not understand was the reason why these women did not simply pick themselves up and leave the environment. I quickly learned the answers. First, there are dangers that can follow escape. Second, these women are often manipulated into believing that the person that they report to loves them, and regardless of the painful circumstances is taking care of them with their best interest at heart.

Human trafficking is not only a business of kidnapping and sexual exploitation; it is intense manipulation. Ministries, such as Alabaster Jar, help these women out of human trafficking. Often, the results are the sad return to the scene because of the manipulation that occurred prior to their rescue. 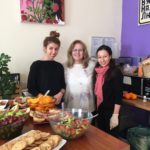 Alabaster Jar is a ministry in Berlin, Germany, with a mission to rescue women enslaved in the sex-trade industry. This ministry seeks to help women in the red light district of Berlin who have fallen victim to trafficking and sexual exploitation. The Alabaster Jar ministry helps these women find freedom and new life through a relationship with Jesus Christ.

Here, scripture illustrates a perfect picture of a sinful woman, broken, sitting at the feet of Jesus. If there is one thing that each of us can relate to, it is this: seeing our dirtiness, and realizing that the only true and permanent rescue is nearness to Christ.

It is easy to drive down the road in the dark, and cast judgement on those who we don’t know or understand, without thinking about our own dirtiness. In fact, that’s what the holy people did to the sinful woman with her alabaster jar. They saw her sin, and then they called her by her sin.

I am thankful to know a Savior who knows me by name and not by my sin. What if we, as the body of Christ, saw prostituted women in this light? What if we sought to be a reflection of Jesus in their lives, rather than that of a Pharisee?

Alabaster Jar is a living reflection of Jesus. In the end, the ministry desires to look at every woman that they have rescued with the grace and words of Jesus: “Your faith has saved you; go in peace.” Luke 7:50

The business of sex trafficking is a matter in existence worldwide. In many corners of the world, this industry is legally tolerated. However, even in places such as the United States of America, this horrific industry thrives.

One of the most crucial things that all Christians can contribute to Alabaster Jar, as well, to similar ministries around the world is prayer. Pray that the rescued women will find a softness in their souls that allows their hearts to open up to Jesus and His love, to break the bondages that are holding them captive. Pray that opportunities become available at the perfect time for these women, in order to be able to survive financially. Pray for the volunteer teams that work for these ministries globally. Alabaster Jar, specifically is in need of additional volunteers to work in various areas of their ministry. The pursuit of these rescues are dangerous for everyone involved. Recently, an older German woman in the Berlin area was beaten beyond recognition, and 3 weeks later died. Therefore, safety is a prayer that is desperately coveted. Pray that God would open the appropriate doors for all of Alabaster Jar’s areas of ministry. Finally, pray against the bondage of human trafficking and against organized crime in the area of sexual exploitation.

Another need that Christians can take part in, is going. Ask the Lord to search your heart. Is He tugging on you to go to Berlin to help with Alabaster Jar? Is He tugging on you to go into your immediate community or a nearby community to become a part of efforts to end sexual exploitation near you? If the answer is yes, then I challenge you to obey. There is someone out there waiting to see a reflection of Jesus in your tenderness.

Finally, as a Christian, you can support Alabaster Jar. Your finances can go toward enhancing the efforts of seeing victims of sex trafficking find the hope of Jesus Christ. This support can also be a source of equipping someone to be Jesus with skin on toward these women who lack hope.

What will you do to take part in showing the world what the definition of love should be?