Greetings to all of you! Some of you are new to our journey, while others have been following along from the beginning of our 34 years as missionaries. We bring you the best seasons greetings and hope it has been a good year. We are finding that we are in a “harvest” season in several of our countries in Eastern Europe and the Middle East and will bring you a few highlights of that. Churches are being planted every month, and people are coming to Christ!

In September and October, we were in England, where we licensed and ordained nine more ministers. We then headed to Bulgaria for our Missionary Family Gathering and heard reports of the harvest hotspots around the world.

I (Bob) was with our leaders in Ukraine as we conducted a pastors conference on mobilizing discipleship. While in Ukraine, we also checked the progress of several projects we have underway. One project includes our new bakery in operation. This is an operational bakery and training for our men and women who are in the drug rehab center in the main complex. 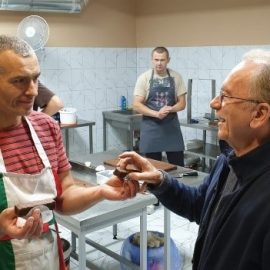 Not far out of town from Kiev, our large drug rehab project is moving forward. The Fourplex was half-finished, and, at first, we rented it. We have now been able to buy the building and property and are finishing the other two units. This building currently houses 30 recovering drug addicts. Praise the Lord; they’re really on their way to a new life in Christ. One of those individuals is thriving in their second year under Pastor Max. 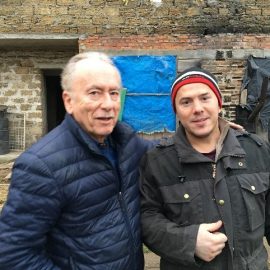 The church planting goal for 2020 in Ukraine is to plant 10 new churches. We have one commitment already.

Went from Ukraine straight to Israel. What a “happening” place! I was with our leaders there, most of whom are ex-drug addicts. We baptized these new Jewish believers in the Jordan river while I was there.
I walked the “skid row” streets of Tel Aviv, where the drop-in coffee house/feeding center is located. I saw the “before” and “after” men at our latest house church/rehab center. There are now 32 locations, many of them, doubling as rehab houses and one as a church. These men and women are now redeemed and passionate for the Lord. The “before” is a sad scene, while the “after” includes people like a man named Michael (far left picture), who was a 20-year addict, but now a dynamic leader. 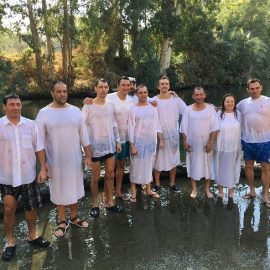 We now have a new location for the Haifa church. The house churches in this city can now move from their crowded buildings that hold only 140-150 people, to a building that was going to be high-end strip club that the city shut down before it could open. This building will seat 450-500. We consider this a win for the Church as the building had near $100,000 worth of computerized lighting and sound equipment that was left behind. 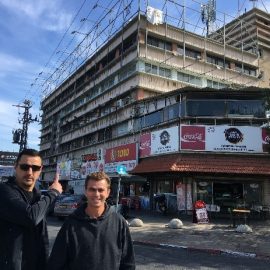 Our church in Bethlehem needs a new building, but that is easier said than done as this is mostly Muslim territory that won’t rent to an evangelical church. Please join us in praying that they will be able to purchase their own facility, which is very expensive in that city.

How can we ever say adequate thanks for all of you who have participated with us in missions this year, and some of you for 33 years? Personally, we want you to know that we are honored to be your legs, hands, and eyes to get accomplished what the Lord has laid on our hearts. Our nationals were able to plant many new churches in Ukraine, Belarus, Moldova, and Israel because you gave. Now over 65 new churches in the last three years have been planted. 2020 is lining up to be another banner year, and we’re so glad you are part of all this.

May the Lord richly bless you at this Christmas season. It is a JOY to serve Him.