During the month of August, we took a short rest with a missionary family and went to some ruins in an obscure native area of Cusco in the highlands of the Andes. While there, I felt that God had something for us to do. We found a temple of the Incas that was erected to the god, Wiracocha. This is the unknowable god who created the sun the moon and the first two Incas. In this temple, there were sacrifices done in front of seven windows. Their legend says, “Wiracocha sent a messenger in form of a condor.” This messenger said, “Wiracocha would send his son to tell them about himself.” My heart longed to tell the people of this area that I knew the rest of the story…

We left the area and went to Puerto Maldonado where we would spend seven days teaching and empowering pastors and youth to thrust forth into the harvest fields of the Lord. God moved in such amazing ways and, upon or return to this city, in October, we saw God move uniting denominations under one banner, Jesus, and baptizing them in the fire of Holy Spirit, but that is another story. My heart continued to burn for the people around the “RUINAS DE PUMA MARCA.” I asked my family to return with me to this 12-family pueblo for four days. I said, “let's see what God wants to do.” God opened the door to share the gospel through the lens of their superstitions and their gods.

I felt that I was living the story of Paul as he shared in the temple before the pillar to the unknown god. Alicia and her son received Christ with joy there at the foot of the ruins as I shared how God “wiracocha” sent His son to pay the blood ransom of Abel and how His blood speaks a better Word. I spoke about how the authority of the curse of “PachaTierra” has been broken and the earth has no hold on the adopted sons of God, and that no payment is necessary because Jesus paid our debt. Today, we are taken back by the authority of Christ in ancestral forgotten lands where the spirits and authorities have never been challenged.

As I write this, we have two of our students from The Awakening who have gone to stay with Alicia for a few weeks to baptize and disciple her. Pray with us as we advance the Kingdom of God and take authority in areas never before challenged. 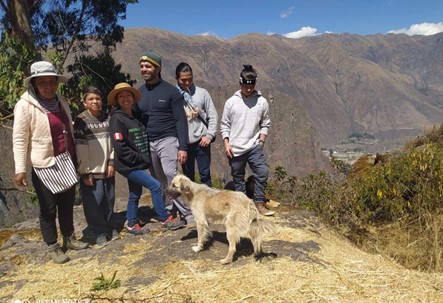