Story from the Field – In Bethlehem

Our Pastor in Bethlehem called me this week to say how thankful he was to be alive! As it goes, he was delivering food hampers to the Muslim neighbors on behalf of their church, in Bethlehem, of around 40 people. Now that’s another story; how their little church is now reaching over 500 families in Bethlehem with food and their prescription medicines.

He had his three five-year-old triplets in the car as they were going down the steep hills out of Bethlehem to Beit Rahal down below. As he traveled down, he suddenly lost his brakes completely. The emergency brake is electronic and would not work while moving. Faster and faster, he sped as he cried out to the Lord to save him and his boys. Dodging cars and other objects and knowing a crash at that speed would be a killer, he suddenly spotted a freshly dumped large pile of construction sand at the side of the road ahead. Knowing that was what he had to hit, he aimed the car for it with riveted focus. The pile of sand grabbed the car like the Hand of God and held them in place. Many shouts of “Thank you, Lord” were heard in the neighborhood. The man who owned the sand said he had just had it dumped there the day before!

It is interesting that the same day that our Bethlehem pastor called me, I also got a call from our Haitian Bishop, Armonon Abraham, and we reminisced about the same story he told me 30 plus years ago when we served in Haiti. Same thing: a steep mountain, winding hill, loss of brakes on a dump truck, and Armonon said that the “Sand Angel” had made sure there was an easy way out, instead of death, as he aimed for the pile of sand on the roadside. Of course, I believe there are always Angels on duty. 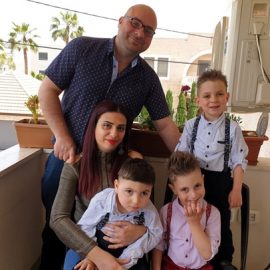 Our Pastor in Bethlehem