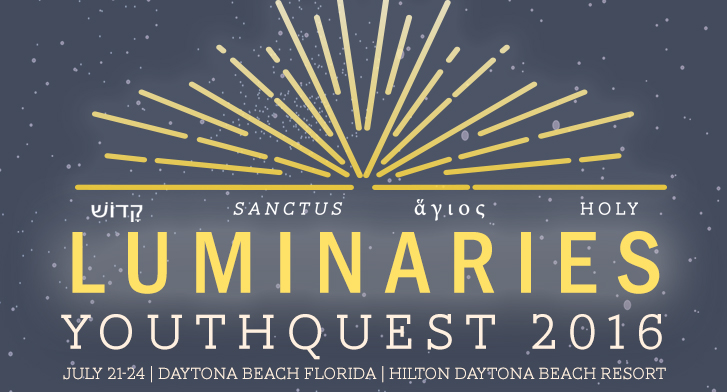 The road to creating the theme for YouthQuest 2016 was a long and winding one, with a diverse group of people contributing to the concept. The theme “Luminaries” is a direct reference to the 2016 Core Value Emphasis “We Prayerfully Value Holiness” and may surprise you with its origin.

In the spring of 2015, The Student Ministries leadership team agreed to include YouthQuest in the 2016 Core Value Emphasis by creating a theme that went along with the Core Value of “holiness.” But how to market holiness to thousands of teens, when the concept is sometimes difficult for even seasoned Christians to explain?

The team began by starting simple conversations with individuals about their concept of holiness. Conversations included Presiding Bishop Dr. Doug Beacham and Communications Director Janese Bennet, as well as local pastors and church leaders. The phrases “life-long process” and “lifestyle” were continually mentioned in these conversations, as well as the concept that holiness was unattainable outside of a growing relationship with Christ. The idea of a life of holiness as a reflection of the character of God began to take shape.

A team of creatives that included local pastors, graphic designers, writers, and videographers then began brainstorming designs. It was during this time that a quote from the IPHC Manual ignited a spark of inspiration:

“Kadesh is the Hebrew word for sanctification and its equivalents. Its verbal stem is derived from the root ‘dash’, which primarily signifies to ‘break forth shiningly’ … We become luminaries in the world. The holiness of God shines in us to the degree of our relationship to Him.” (IPHC Manual, page 60.)

Dictionary.com gives three descriptions for the definition of luminary.

-One of the luminaries in the field of medical science.

The Student Ministries team immediately knew they were on to something. Isaiah 58 further emphasizes the theme, which was used in the YQ promo commercial video. “Reflect the Source” was also added as a catchphrase to help explain the Luminaries idea to an outside observer.

“We felt like students and leaders alike could resonate with the idea of becoming a giver of light, that we become reflections of God’s character and love through our relationship and obedience to Him”, explains Kaleigh Bishop, Creative Specialist for Discipleship Ministries and a member of the Student Ministries team. “I love that this theme was such a team effort. I love that it’s creative and inspiring and it’s also rooted in our leadership. It has a foundation built from hours of discussion and prayer and study, from multiple sources and perspectives.”

The Student Ministries team approved the theme and immediately began planning the promo items, staging, and Fine Arts Award Show around the “light” concept. Even the creative writing, video, and sermon theme for Fine Arts are included in the Core Value emphasis with “Holiness- Reflecting the Source” as their theme for 2016. 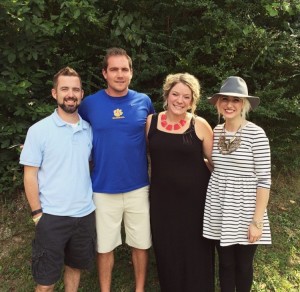 “We’re really excited to see everything come together at YouthQuest 2016,” explains Kaleigh. “This will be the first event that the Student Ministries Advisory Team has planned together, from the ground up, and we’re putting our hearts into it one hundred percent. Our goal for this event is to truly inspire students and leaders to pursue a lifelong relationship with their Creator. To understand that holiness is not about outward appearances, but an inward transformation, and that each and every one of us are a light in the darkness. By seeking the Father and desiring to mirror His character, grace, and love, we become reflections of Him in this world, and we shine into the dark places and reach those who are blind. That is our purpose, our calling; to be the light.”