A Tribute to Bishop Beatriz Lopez 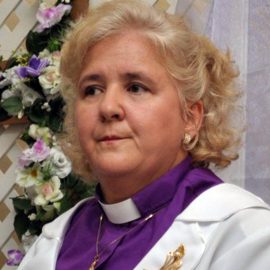 Pastor Beatriz Lourdes López Albuin began her foray as a member of the Governing Board of the Pentecostal Holiness Church of Cuba in the late nineties; and in 2001, she was elected Conference Superintendent in an Extraordinary Conference.

Since then, the fruit of her over ten years of leadership serve as a faithful witness that her apostleship was from the Lord: from the intense and diverse agenda, to the effectiveness of her pastoral role as superintendent, the fervent move of the Holy Spirit in the Conference, and the diversified relationships; the growth and doubling of our national membership, to the planting of twenty new churches, the assimilation of almost a hundred new pastors, local church workers and ministers, and financial growth; the significant progress in biblical-theological training, the graduation of hundreds of students from the Pentecostal Biblical Institute and the Ministerial Advancement Course (CURSUM); the improvement of the organizational structure, the construction and remodeling of dozens of houses of worship and the national campgrounds; the increase of assets to the Conference, the provision for the needs of the workers, in addition to the management of donations of food and medical equipment to the country.

In 2009, she resigned from her post to serve as the vice-chairman, but after seven months she reassumed the Superintendency due to a season of institutional unrest, and, again, [a] season of restoration and growth took place under her care for the conference.

During the XXXV General Conference of the Pentecostal Holiness Church of Cuba in February of 2011; Beatriz was reelected Superintendent and at the bequest of the Governing Board, and unanimously supported by the delegates, she was conferred the honorary title of Bishop; the highest clerical recognition conferred by the Cuban IPHC, and for the first time in the history of the International Pentecostal Holiness Church, this honor was bestowed upon a woman in Cuba.

Since 2008, Beatriz has led the Emergency and Humanitarian Aid Committee of the Council of Churches of Cuba; where she led the rebuilding of the Cuban church and the people of Cuba in general, following the devastation of the 2008 cyclonic season, the most damaging of the last 50 years. This was a significant intervention from a societal standpoint to the wellbeing of her country on a national scale.

As we celebrate the homegoing of our dear Sister Beatriz Lopez, many memories are recalled of her days in ministry. One of the highlights most people remember is her service as Bishop of the Cuban Conference. In days of extreme opposition and hindrances against the church and expansion of God’s kingdom, Bishop Beatriz exemplified the attributes of a determined and strong leader. Having a tenacious spirit, she led the ministries forward and established a strong and sufficient foundation for the Cuban Pentecostal Holiness Church.

On a personal note, I remember her speaking at the Global Assembly in Vancouver. In sharing about the ministry in Cuba, she communicated how God brings triumph, and that we must keep our faith in Him. There is no doubt that Beatriz Lopez was committed and determined to accomplish God’s purpose in her own life, all while influencing and imparting to those she served.  I am sure she enjoyed hearing the Lord say, “Well done, and welcome home.”

What a joy it has been to work with Former Bishop Beatriz Lourdes López Albuin over the past years. We give God the glory for what was accomplished in her service in the IPHC Cuba.  [As] Bishop for 14 years, she oversaw many advancements in establishing the conference, which has continued to grow after her service. We honor her memory and pray for the work to continue to grow on the foundations she laid.