A MAN OF GOD 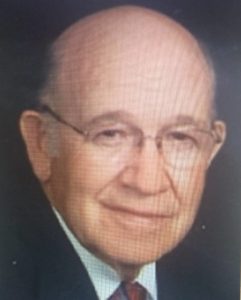 Not too long ago, a man with a great vision left this earth to be with our Lord. His name is George Loar. Not too many people know about him, but surely our Lord knows him well. He was a faithful pastor in the U.S. and had a great passion for planting churches in the Ukraine.

We did not know him when we started our church planting endeavors in and around Kiev in 1997. Over time, we kept hearing his name and became curious about this man who, so many times, traveled overseas to start more and more churches all over the Ukraine. He did not come alone but was always accompanied by some older brothers in his church. Pastor George and his team did not shun the faraway places but, year after year, visited the new church plants, even as far as Crimea.

Finally, after some years, we were in the Ukraine at the same time his team was there and we met. His joyful and loving appearance made a great impression upon us, and we felt very close to him and his whole team. We talked much about the work of our Lord and how important it is to make it possible to keep planting churches in Eastern Europe. His desire was to meet with all the new pastors and church planters and to personally go and see the progress and growth of the new churches. This was our strategy also.

After many years of fulfilling his vision, he could not come anymore. The travel was too much for him and his team. From that time on we kept in frequent contact with him, and he asked us to visit his churches on a regular basis and send reports. We were very busy in the Ukraine at the time, not only to minister in the churches we had helped to plant but also to visit pastor George’s churches. This brought us to Crimea and the southeastern part of the Ukraine, which is now separated from the main country. I remember the sincere faith of the pastors in the village churches all over this area. The Christians were so serious. They knew what life was, having to work in the mines, where any moment a disaster could happen. Many a time, we were in deep conversation with the miners to try to show them Christ. Now there is a war going on, great uncertainty, and life has become harder for everyone. I remember one time in particular when we were looking for a small church in a forest area and suddenly were confronted by Russian border guards pointing their guns on us. We were extremely quick to explain to them that we were lost and had no intention to cross the border. They cordially listened to us and taught us the right way. Those memories we will never forget. There will be a time very soon when we will meet our brother George again and will worship our Lord together, all the while rummaging over the good old times we had in the country of Ukraine. 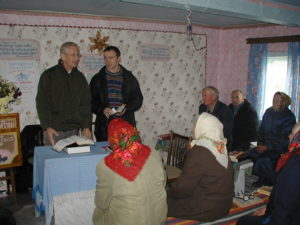