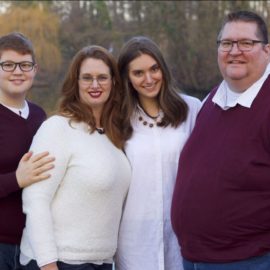 My Perspective of Justice

How would one define biblical or divine justice? Justice can simply be defined as “what should be.” Therefore, as we add the term “biblical” or “divine” as modifiers, we are indicating that God and His Word are the standards to what should be.

As we journey through the entire counsel of God’s Word, we see His justice comes from deep within His character. His love for humanity is what motivates His justice. His heart has always been to defend those who are in need, captivity, and less fortunate. In Isaiah chapter one, the Lord calls for Judah to repent. In verse 16, He instructs them to cleanse themselves and to “cease to do evil.” Then, as we come to verse 17, the instructions are to find purpose in promoting justice:

“Learn to do good; seek justice, Rebuke the oppressor; Defend the fatherless, Plead for the widow.”

Although they were instructed to cleanse themselves and stop doing evil in verse 16, it was not enough. God instructed them to do good in verse 17!

Allow me to contextualize this according to the time you and I live. It is not enough that we are born-again and have insured ourselves eternity with Jesus. It is also not enough that we have stopped living in a destructive and sinful way, or that we are regular worshipers in our houses of worship. We must also value what God values. What does He value? People. Specifically, people in need. People who are discriminated against, less fortunate, persecuted, and forgotten. Ken Wytsma, founder of The Justice Conference, made this statement:

“Doing justice is promoting what ought to be, and fighting injustice is fighting what should not be.”

The above statement certainly represented the ministry of Jesus. In Luke 4:18, Jesus was reading the scriptures in the temple on the Sabbath day. He read from Isaiah 61, and His mission in life was revealed.

“The Spirit of the Lord is upon me, because He has anointed me to preach the gospel to the poor; He has sent me to heal the brokenhearted, to proclaim liberty to the captives and recovery of sight to the blind, to set at liberty those who are oppressed;”

The life of Jesus was standing for “what should be” and fighting against “what should not be.” This mission is now the responsibility of the Church.

It must be said that there is a difference between “justice” and “truth.” As mentioned, justice is “what should be” according to God’s heart and the standards of His Word. However, truth is what is really happening. For example, according to the Word of God all are created in the image of God and are equal to hear and receive His Word and to live according to His divine purpose in our lives. The truth is, not all people are considered equal, and many are deprived and discriminated against due to their gender, social status, educational level, ethnicity, or religious affiliation. The world is full of societies that are deeply rooted in segregation and shame cultures.

Our family has been serving in Europe since November 2002. Over the years, we have seen so many injustices, ideologies, and practices that could drive us to a holy and righteous anger. Gretchen, my wife, works weekly with human trafficking victims from all over the world. Often, it is family members who betray or manipulate these ladies to enter into such a profession, so they can provide for their families in their home countries. In recent years, the Belgian government legalized euthanasia for children, if the child’s condition can be deemed as unbearable for the family. In Eurasia, there is an ancient practice of “bride kidnapping.” This is where families will kidnap a young woman because their son is attracted to her and chooses her as his bride. The list of injustices can go on and on, as we see the world for what it really is… LOST! The harsh reality is that we live in a fallen world that desperately needs the love and ethics of Jesus. The Body of Christ has been called to be His hands, His feet, and His voice on the earth.

As we strive to follow the life and example of Jesus, we find that He was not only concerned for the spiritual condition of mankind; His concern was holistic. His concern was also for the physical, emotional, social, and economic condition of mankind. Just this week, I met with a couple via video conference who is serving in a region where women are deeply discriminated against. I was so deeply moved by a statement the wife made; “sometimes all we can be is a hug or a shoulder to cry on.” This statement was in response to a question: “What can you do to change the circumstances of these women?” Their compassion and passion to serve these women and to disciple a nation does not always have clear answers. However, their obedience to stand for God’s justice is truly inspiring, and it is all God is asking from us. Every day there are nationals and missionaries around the world who are serving the forgotten, neglected, and abused. They do so often by putting themselves in harm’s way, sacrificing lucrative careers, and leaving their extended family for lengthy periods of time. However, I am confident most, if not all, would tell you that the sacrifice is well worth the obedience of serving the heart of God! They are living examples of “what should be” and fighting against “what should not be”. 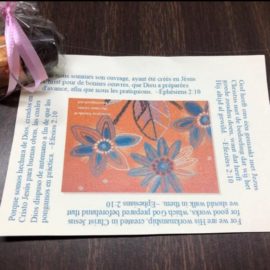 A card and chocolates that were given as gifts to those working in the red light district of Antwerp, Belgium on March 7, 2019, for International Women’s Day.