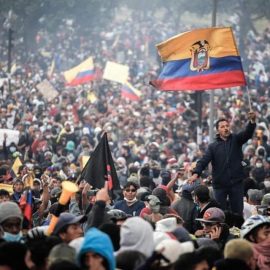 As I think about our core value, “We Prayerfully Value Justice,” I am reminded of the fact that the Bible is full of scripture regarding justice.

I am drawn to Isaiah 61:8, where it tells us, "For I, the LORD, love justice.” In other words, the Lord here is saying, “I delight in giving to my people what is right; and it is right that they should enjoy my protection and be favored with my kindness.” So, if the Lord loves justice, then as His followers, so shouldn’t we? And, we all know that to love something, at times, means that we will have fight for it and stand for it.

I want to share something that just happened about a month ago, here in Quito, Ecuador, in regard to fighting and standing.

In October, there was an uprise throughout the entire nation. It was the people against the president. The cause of this uprise was that there had been a fuel subsidy in place since the mid-70s, stating that fuel prices would never change. However, because the nation has severe indebtedness, the president thought that the best and fastest solution to the problem was to increase the fuel prices.

Diesel fuel was originally $1.03 per gallon, but the president decided to change it to $2.30 per gallon, more than doubling the cost.This increase, instead of becoming a solution, created a disaster. In all actuality, this was an injustice to the hardworking people in this country. Most of the people who plant and raise crops are the indigenous people. The very ones who use diesel for farming and for transporting their goods were suddenly being forced to pay an extra $1.27 for a gallon of diesel. Some of them could barely pay the $1.03 per gallon, as it was.

The president said that he was not going to change his decision. Therefore, there were protests, riots, road closures, etc. that took place throughout the entire nation. The indigenous people, who were scattered throughout the country, decided to come together and unite as a strong force. They tapped into their entire arsenal, which meant that some walked, some rode in the back of trucks, some carried sticks, and others had machetes. They even made shields out of whatever they could find.

Eventually, after a few days, 50,000 to 70,000 people had converged in Quito around the presidential housing and buildings. The president did not back down at first, but neither did the strong number of the indigenous people. So, what happened?

After about ten days, there was a meeting between the president and the indigenous leaders. They decided that, together, they would work on a resolution and that the fuel prices would return to normal. The injustice was turned, and justice was obtained!

One day, as I was reflecting on all of this, it was like the Spirit of God showed me an analogy regarding justice. As followers of God and Pentecostal believers, even though we are scattered throughout the world, we should seek to truly unite and come together through prayer as a strong number and force.

We should all tap into the arsenal that we have in and through the Holy Spirit, and we should all seek to truly function in the power of our calling, anointing, and gifting. If we would fight and stand together, we could change more of the injustices that are happening throughout the world and could help obtain more of the thing that the Lord loves: JUSTICE.