Fears that rough sleepers may die in sub-zero temperatures have prompted a church to open its doors at night, and nine people have already taken shelter.

With the wind chill factor set to make temperatures feel as low as -12°C overnight this week, the Bridgend Town Centre Church has appealed for volunteers, blankets, and food for those in need.

Pastor Lem Turner, from Compassion Church, said they had seen a rise in the number of homeless people and believe existing provision will be overwhelmed, leaving some out in the cold.

“We put the posts on Facebook early on Monday morning and had an outstanding response from our community,” he said.

“We’re looking for volunteers, anyone who can help; and we might expand this thing as we see the need within the community.”

“We’re going to have some blankets here for people, a soup kitchen, maybe offer a movie or two, and a warm and a safe place for people to sleep.”

“I don’t think anyone in this community should be sleeping out because we’re not sure if they’d make it through the night.” 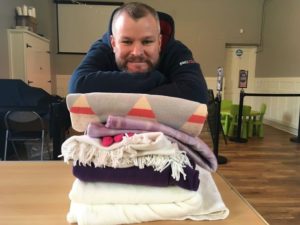 Among those who came in from the cold on Monday evening were a couple, Sarah and Craig (not their real names).

Ages, 39 and 51, they have been sleeping in shop doorways and a caravan, which has no heat or lighting.

They believe as many as 30 to 40 people sleep rough regularly in Bridgend.

Sarah, who has fled an abusive ex-partner, does her best to manage a heart condition, which has left her with a pacemaker, while Craig tries to find work.

They said the council won’t house them as they have not been in the area long enough. The two have come from the west country but scrape together £50 to £60 once a week for a night in a warm bed and breakfast. 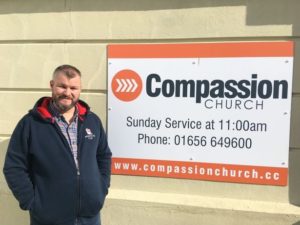 “They have capped Craig’s benefits, so he’s only on £40 a week. They are still taking rent top-up out,” said Sarah, who is also paying off an overdraft she had to use.

“When we run out of money we have to beg,” she said.

“But it’s humiliating. Craig got punched the other night. They went to give him money, and he was punched.”

Town councilor, Steven Bletsoe, who is helping to organize the open-doors facility, said they have been stunned by the reaction to their appeal for volunteers.

“We asked for 12 volunteers to cover three shifts overnight, and we now have 50 to 60 people,” he said.

Steve and Lem said the Floorspace overnight facility, run by housing support service Gwalia on the Bridgend Industrial Estate, has only 10 places.

The aim is for the church to be an overspill area until the cold spell passes.

“Where the church comes in is that we have been doing church for so long, but we have stopped being the church,” said Lem, who is originally from Zimbabwe, but lived in the US for 12 years before coming to Wales.

He said Compassion, on Nolton Street, Bridgend, has two rooms available; one for men and one for women. A team will also go out to ensure all rough sleepers know the service is available.