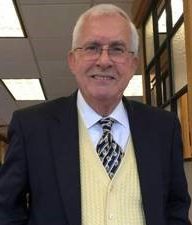 World Missions is grateful for the life of John Burnette, and we thank God for his ministry. He worked with the IPHC World Missions Ministries Division from 1973-1974 as a missionary to Hong Kong. He used his teaching and leadership experience to serve at Wing Kwong College. Our prayers are with his loved ones at this time.

Funeral services will be held 2:00 PM Tuesday at Wilkesboro Baptist Church with Dr. Chris Hefner and Rev. Alfred E. Andrews, Jr., officiating. Entombment will be in Scenic Memorial Gardens. The family will receive friends from 6:00 until 8:00 Monday at Reins-Sturdivant Funeral Home.

Mr. Burnette was born March 15, 1936 in Barnesville, Georgia to Harvey Daniel Burnette, Sr. and Myrtle Florence Cook Burnette. He attended Emmanuel College, Lenoir-Rhyne College, and received his Masters and Education Specialist degree (Ed.S) from Appalachian State University. He served as the principal of multiple schools over a twenty-seven year period. He was a member of Gideons International – South Camp and also served as a Christian educator missionary. He served as Interim Pastor and performed with Seniors on Stage. He was a member of Wilkesboro Baptist Church where he was a church choir member and former deacon.

He was preceded in death by his parents and his brother, Harvey Daniel Burnette, Jr.