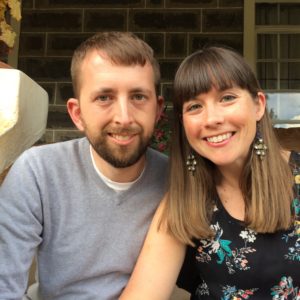 Summer and I left the USA to begin our work at East Africa Bible College when we were 25 and 23 years old. We knew we were young, but our youth was especially noticed by people in Kenya. One Sunday morning, soon after we arrived in the country, we were invited to speak in a church that introduced us as the “child missionaries.” Many in our community thought we were brother and sister, rather than husband and wife, and watched for our parents to appear somewhere behind us. However, nearly a decade later (we are now 34 and 32), we can look back and see how their observations were justified. We looked very young.

Generations are often measured by sight. Without knowing someone’s birthdate, we can still identify with some accuracy the generation to which they belong. Unfortunately, the term “generations” is often intertwined in our mind with stereotypes, and we frequently engage in age-profiling. Much like racial-profiling, we allow preconceived notions about age (whether true or untrue) to inform our opinion and approach towards others. This practice will usually misinform more than contribute to understanding. Thus, we are prone to dismiss someone’s input, friendship, or value based on a purely superficial metric. Thankfully, the IPHC has stated in its core values that we, as a body (and hopefully as individuals), value all generations.

The IPHC has drawn this principle from Scripture. From the earliest days of the church, the congregation of believers in the book of Acts was mixed generationally. The prophecy of Joel quoted by Peter on the day of Pentecost clearly indicated a great diversity among the people of God in terms of gender and generations (with references to young and old men and women). Paul’s writings and practical instructions in the Epistles reveal that the diversity anticipated on Pentecost was realized very quickly in the new churches he was planting. The church was mixed ethnically (Jew and Gentile), in gender (male and female), in socio-economic standing (slave and free), and generationally (young men, young women, fathers, mothers, widows, etc.).

The same diversity should be the goal of the church today. Churches that are comprised of, target, or appeal to only one generation are negligent.  Yet we have seen so many cases of generational discrimination in our congregations. Older members reject the younger, new members with rigid traditionalism. Young churches discourage older attendees by totally rejecting traditions. A look through the ministries that a church does or does not offer can indicate if any generational discrimination is taking place. Even our selection of music can be biased towards one particular generation. Unfortunately, cycles of discrimination can even emerge.  Older congregations can neglect the generations below them for the sake of tradition, resulting in newer congregations neglecting the generation above them for the sake of relevancy. We have created labels like “traditional” and “contemporary,” but the reality is that this is a false dichotomy. Churches were never intended to be classified by the generation to which they cater.

The primary issue is that we naturally tend to assign greater significance to our current age bracket. As we grow older, we have new-found appreciation for the period of life in which we find ourselves. Since our awkward church introduction nearly ten years ago, we have shifted from our initial response, “how dare they call us child missionaries,” because we have a better understanding of why we were called children that day. Healthy maturity will usually include changes in perceptions and priorities, but it also places great value on unity with others who may look, perceive, and prioritize differently. Scripture makes it clear that the Body of Christ is diverse, yet mysteriously unified by His Spirit. Every generation must be willing to lay aside our own perceived age-bracket entitlements and cross over generational barriers that have been constructed by our cultures for the sake of unity and to glorify His name.

Summer and I have been fortunate that other people were willing to cross generational barriers to befriend and mentor us. Our lives and ministry have been enriched and influenced by older believers who initiated and maintain deep relationships with us. In addition, one of our closest friends is someone several years younger than us that we met in Kenya. Her spiritual maturity and unwavering commitment to prayer have been a great blessing. We both have gleaned much from all these friends, pastors, teachers, and family members. As we have opportunities to work alongside younger and older people in ministry, we recognize the challenges of doing this. It is not easy to cross the generational line and commit yourself to a group that thinks, speaks, and acts differently than you. Cross-generational ministry, even in your own community, is very much like cross-cultural, international ministry. It is difficult and many are tempted to give up and just deal with those who think, act, and speak (and sing) like them.

If we indeed hold all the generations of our community as a core value, we will be willing to break down the barriers and divisions that exist between those of different age groups. Like missionaries, who must learn different vocabulary, sing different music, and even think in different ways, generations will have to learn to communicate in ways that are relevant to each other. Initially, our thoughts about what we see in other generations might include adjectives like strange, outdated, or bad, but we must be willing to see the value in the unfamiliar.

Successful cross-generational relationships do not happen quickly or easily. It takes times to develop. We learned this both in America and Kenya. It is natural for other generations to view us as we view them: with suspicion and bewilderment. Thus, we must commit ourselves to establish the credibility we need to speak across generations. Credibility is not established by simply changing clothes or hairstyles or learning a few new words or songs. Genuine credibility forms over time by habitually and intentionally demonstrating your commitment and concern. Generations before us and after us are not really looking for us to simply adopt their fashion or speak their vocabulary; they want us to prove our commitment to the things that matter most: relationships and service to God and our neighbors.  We are still younger than many of the people we work alongside in East Africa, but we have earned their respect and established our credibility so that our appearance is no longer the metric by which we are assessed. When we forsake physical appearance as a qualification for relationship, it may not be immediately reciprocated, but it opens wide the door for successful cross-generational relationships.

We value all generations. We must not look upon the other generations with disdain or dismissive eyes. There is value there. Old eyes can still see. Young eyes can already perceive. All eyes seeing together, looking in a common direction, can discern and communicate the whole picture. This, I believe, is the will of God for His church. We are not to be a group of mono-generational churches bound together by a common denomination. Rather, each local church must express the values of the entire body and strive to be multi-generational, where each person is encouraged to see the value in each generation, learn from each generation, and invest in each generation. It is not us versus them, it is us together now and for eternity.