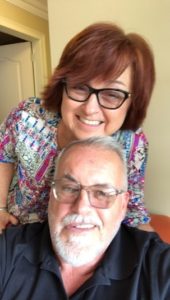 We pray you had a great holiday season, and that you entered this new year of 2018 with high expectations from the Lord. Our prayer for you is that God will bless you and your family in great ways. After a year of busy schedules and several medical issues, we were able to start the new year refreshed and ready to get on with ministry. We want to share a little news of what has been going on since the first of January. Remember, this is all possible because you have joined in support of this ministry.

If you believe that God can make a difference in people’s lives, just wait until you hear this. At the beginning of January, I (Dan) traveled to Asuncion, Paraguay. It had been a number of years since I had been there, so what a blessing it was to see how the works have grown. In Asuncion, we only had one church and a couple of small drug rehab centers on my first visit. Imagine my surprise when I saw that these works had become five churches and two vibrant Drug Rehabilitation Centers. Missionary, Mitch Nichols, flew from Ecuador to meet me there. One of the places where we ministered was an exciting young church of about two hundred members. The congregation consisted of young families and couples, each about forty years old and younger. However, the uniqueness of this church is that a member of each family came through the Drug Rehab program. PTL! God does change lives, and he has proven faithful in Paraguay. Enrique Coronel, Argentine Supt., also met us there and we, together, established the first Conference Board. 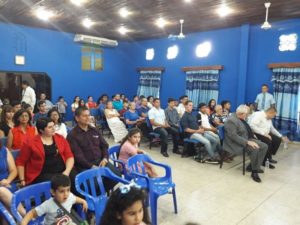 I was also blessed to be in Bolivia with two great men of God, Tony Adams and David Woodard, from the Texas Conference. We met for a series of teachings in Cochabamba, Bolivia at their annual assembly. I praise the Lord for a great week of fellowship and ministry with our IPHC family. A big thanks to our leaders in Bolivia for a great event. The highlight for me was sharing in the College/University service in Casa Del Padre Church. 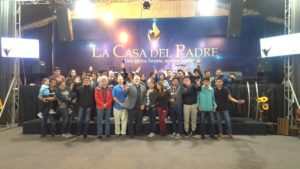 Brenda and I made a trip into the jungles of the Amazon basin to visit our work among the Ashuar Indians, or at least that was our intention. We were meeting with Pastors Rob and Cara Clegg, as well as some others who traveled with them. We planned to fly into the jungle. Our host missionaries, Mitch and Jewel Nichols, had everything ready for us to fly in. As plans go, we ended up being rained in and the plane could not get off the ground. It rained for three days. However, God had another purpose for this trip and “flexibility” is the key word in missions. We drove to another work that we have in the south, outside of a town called Macas, and held a small medical clinic with some tribal people who have moved out of the jungle to a small village. We affirmed our people to keep moving on with the work of the Lord. God connected the hearts of our tribal church to Pastor Clegg’s group, and I know that we will see great things come out of this relationship. 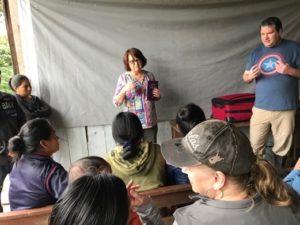 BACK IN COSTA RICA

We finished the month of January back in Costa Rica. Apostle Billy and Helen Jacobs
and Beverly Dickson visited. We were blessed with a week of powerful ministry in
several churches as well as a special pastor’s meeting where Bro. Jacobs ministered
under the anointing of the Spirit to each congregation.

A very special thanks to Rick and LaTrissia Black, as well as Jeff and Kimberly
Oeder for their servants’ hearts to make the week such a successful time. 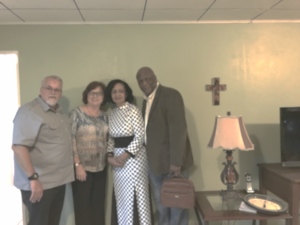