Chaplain (LTC) Randy Sellers is an ordained minister in the Heartland Conference. Friday, February 26th, 2016 was a great 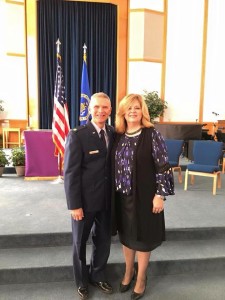 day for God and Country, the United States Air Force, the International Pentecostal Holiness Church, and especially for him and his family, as he was promoted to the rank of Lieutenant Colonel at the Little Rock Air Force Base Chapel.  Chaplain (COL) James Tims the Air Mobility Command Chaplain, presided over the ceremony. The 19th Air Lift Wing Commander, Colonel Chip Brown, Randy’s immediate supervisor was also in attendance and the chapel was nearly full to capacity with Airmen and civilian personnel to witness this great occasion which is a testament to the spiritual impact Chaplain Sellers has on the base.

Chaplain Sellers was blessed with the attendance of many immediate family members as well; his wife Sheila, daughter Haley and son-in-law Justin Stephen, son Jonathan and his fiancé Summer Hill, his other daughter Dana was not present as she is in the Peace Corps, sister Teresa Sellers, in-laws Gary and Bea Vavak, and his cousin Bonnie May. Also in attendance was Chaplain (COL) Jerry L. Jones, US Army Retired (endorser for Chaplain Ministries, IPHC), his wife Cynthia, and the former Bishop of the Heartland Conference, Bishop Frank Tunstall and his wife Lou. 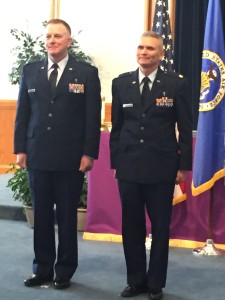 Sellers’ service in the Air Force. A paramount statement about him is that he possesses a ‘deep spiritual reservoir’ to provide pastoral care to those he provides pastoral care. Chaplain Tims then promoted Chaplain Sellers to Lieutenant Colonel and then presided over his ‘Oath of Office’.

Chaplain Sellers presented a moving acceptance speech focusing on how much the Air Force means to him and his family, especially Little Rock Air 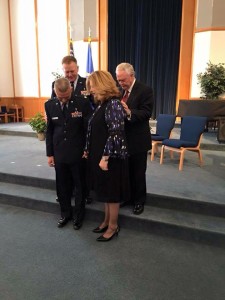 Force Base. He also spoke about his and Sheila’s preparation for life, giving credit to his mother and father and his in-laws.  Important also was his acknowledgement of his family of faith; those who had prepared him for his journey as an Air Force Chaplain.  And of course, Chaplain Sellers followed the great military tradition of giving flowers to all the family ladies in his life and a coin to all the men. 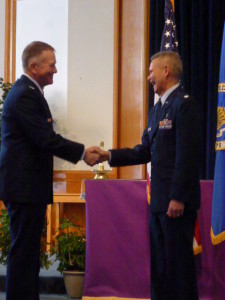 upon them and their ministry to the Air Force.

Congratulations Chaplain (LTC) Randy Sellers! We look forward to hearing more great things about you in the future.