Mission:M25 leads a team, including Pastor Paul McElroy (Helena, MT) and Pastor Rick Haug (Maiden, NC) and seasoned M25 members from Christian Heritage Church in Amarillo, TX and Ft Dodge IA, to storm the ‘beach’ of the Crow Reservation at Crow Fair 2016 in Crow Agency, MT the week of August 17-21, 2016.

The vision was to give a Tobiano Paint horse on Saturday night during the Grand Entry. This had several hurdles to jump, 1) Saturday night the agenda is packed, 2) A white man is not allowed to address the crowd, 3) this was being done by the church which had never been allowed before. As we were walking around the “Arbor” where all of the dancing and competitions took place, Pastor Dr. Russell (Rusty) StandsOverBull told me, ‘it will be a miracle if we can get this done’.

First thing, Pastor Rusty was asked to open the evening in prayer. This was Pastor Rusty’s first time to engage this event. As he stated in the service on Sunday evening, ‘I was raised Pentecostal Holiness, meaning, we did not go to ‘those places’. A huge religious, cultural step for this successful professor of three universities, had to make. We forget Jesus spent most of His time outside the Temple, as the Bible records, sitting with the hopeless, the scum, the tax collectors, the adulterers, the demon possessed, etc.

Then the stall game, we were to give JJ (the beautiful horse with saddle) away at 7 pm. There were over 1500 free tickets in the bucket to be drawn from, people were anxious. Then it was 7:45 pm, then the clock hit 9:15 pm and they decided they would allow the drawing. (It was clearly seen, we were invading a culture driven by many who still hate the white man (if hate is ever justified they are justified) and a Christianity forced on them, even giving them “Christian” names. This was a time to stand firm, eyes set but full of the “Fruit of the Spirit”, patience.

As we stepped to the center of the Arbor, considered Sacred Ground, two white pastors and a Native American who had withdrew from the event decades ago, the air was static. The announcer, obviously a believer, made all the right statements about churches coming to give because we had received; we were there to honor the Lord and the Native American, etc. Then when we began to draw the tickets (draw five and the first one who came to me, would get the horse and we would keep drawing five tickets until the horse was given) the crowd became quiet. Quietness was not something experienced in this event that had the war drums playing and people dancing, people talked loudly as the announcer would talk but now, there was a hush. They wanted to hear who won this horse. The numbers were drawn and I was allowed to speak into the microphone and then I exerted, ‘Thank you for allowing us to present this horse and may the Lord bless you’, the microphone was quickly removed.

Just as the announcer was about to take off walking back to the announcement stand, Pastor Rusty reached out and took the microphone under an anointed boldness. He spoke in the Crow language, ‘For all the treaties that have been and are being broken by the white man to the Native American, these white pastors come to say they are sorry and to build a bridge of forgiveness to our people.’ There is a ‘Holy Hush’ that comes over the crowd of thousands of dancers and drummers and guest to watch. This is the largest PowWow in the USA and is known to have the largest number of TeePees in the nation. Pastor Rusty moves on and shares a short Gospel message and invites them to his church. We had just witnessed a miracle. 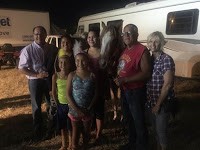 A young lady, Lorri OldBull, won JJ! She was ecstatic because of her praying for eight years for a horse for her children. She resides in Pryor, MT, where Arrowhead Christian Center, the home of Pastor Rusty.

The next night Pastor Rusty ventures out to the Arbor again to eat a bowl of soup with his cousins. He later shared how he could barely eat the soup due to the number of people coming into the teepee desiring prayer, even the prayer of deliverance over a cousin bound by a drug addiction was experienced.

As M25’s final riders departed, Pastor Rusty, his wife and Mom came around the bikes and shared how good it was to find a way to take the Gospel to the people. He stated they needed creative ways to penetrate the tribes, who are suffering from hopelessness, addictions, poverty and suicide. We all agreed this must happen again next year, (funds for the horse is already committed and we have the saddle already donated!)

Once again, we have seen the Kingdom of God advancing as we fulfill the commission of ‘going’. I remember a vision while riding my Harley across Dallas, TX eighteen years ago. I could see how we as a church had worked to ‘perfect’ evangelism in our country. We put buoys on the lake with signs on them directing the ‘fish’ where to go if they wanted help. (We also are good at dropping floaters (tacts) on the water). We had modernized and professionalized the churches, that way when the ‘fish’ jump out of the lake, we would be equipped to help them. (We are excellent in treating the symptoms but never take time to find the root of why they were ‘self-medicating’ or whatever their problem was). M25 has found much fruit, on a ‘skinny’ budget to go to the lake, rather than dig a lake that will attract the fish to jump out and come on over.

M25, under the leadership of Pastor Paul McElroy, served Crow Fair by picking up trash and cleaning up the Arbor and vender’s walkway every day. We made sure on Sunday to do a great job to show them we did not do it just to get the time the night before.

I want to thank:

In conclusion, a beachhead is to open and establish a way for others to advance. The opening is there, now we invite you to pray about going with us to continue to advance the Kingdom.