In February 2017, Gary Burd was invited to the South Carolina Conference to present Knight’s Training to a group of men from several churches in the area. Pointman, Angel Alba, worked with the churches and conference to coordinate the gathering which started on a Friday night with a “Battle Cry” and was followed on Saturday with a full day of training. In the end, Bishop Greg Amos, Assistant Superintendent, Dean Morgan, and Discipleship Ministries Director, Morris Smith, all knelt and received the charge to be a Knight. That is to, “Live Pure, Speak Truth, Right Wrongs and Follow the King.” They were joined by two Senior Pastors, Cory Jones and Jason Cook, plus several ordained ministers, leaders, and lay leaders in the church.

Now in February 2018, Gary returned to the conference and met with some of the Knights for a time of testimony and to talk about the ministry. One young man, Dustin Driggers shared his testimony, we had to share the story.

Dustin was “high” on drugs when he took the training. He was able to follow the studies and recite the creed to pass the test. Pastor Cory Jones felt this was what would take Dustin that extra step to get this addiction of thirteen years behind him. The Lord used this time to ground his commitment to becoming an overcomer. 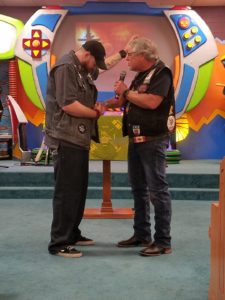 Dustin, under the guidance of Pastor Cory checked into a rehab ministry that took him away from his family, his friends, and his surroundings. He stated over and over how difficult it was to be away from the family, but the Lord orchestrated, in his opinion, something that validated he was doing the right thing.

He was given the task of “re-wiring” a skating rink. The breaker panel was the issue, he had worked for several hours on it, frustration added to his desire to go home. He had to go so far as to tear out a part of the wall, it had been this way for 30+ years. The thing is, at the bottom of the wall he found a plastic “knight”. We believe it was his confirmation, Knights stay the course.

After graduating from the rehab, he joined a newly organized “Celebrate Recovery” at First Pentecostal Holiness Church in Lake City, SC. He has done so well that the director, Gary McDaniel, has Dustin on a path of leadership. Soon, Dustin will be moving into a place to stand with someone else struggling with a life controlling addiction. 2 Corinthians 1:4 teaches us to “pass on” the comfort we receive, doing this allows you to grow and continue your healing, all the while helping someone else!

Gary spoke at Dustin’s home church, Emmanuel Mission, in Lake City, SC on February 18, 2018. In the middle of the message, when speaking of Jephthah in Judges 11, Gary called Dustin to the front. Dustin was then presented a “Challenge Coin” from William Wallace Memorial in Sterling Scotland. The challenge was presented in front of the congregation to live the life of a Knight in the Kingdom, remembering his success or failure could effect many others in the future.