Supernatural determination! God has given grace and provision to accomplish fifteen years of Mission M25 having presence in Washington DC on Memorial Day for the Rolling Thunder. This event promotes healing for the veterans, primarily for the Vietnam Veteran by giving them a welcome home they never received, and to call our nation into accountability to bring our soldiers home.

For fourteen years, Mission M25 has had a presence on Run For The Wall (RFTW), a motorcycle ride to replicate the mission of Rolling Thunder while riding on three routes from Los Angeles to Washington DC. RFTW, which was started by a Marine who decided to do more than complain and actually activate veterans and patriots across the USA to make a statement, celebrated it’s 30th year. We were so honored to have James Gregory, aka “Gunny” with us as we crossed the USA. 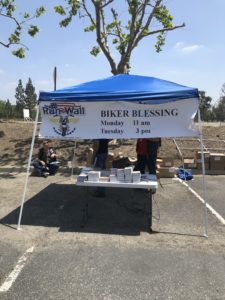 For Mission M25, this was a record year, which was needed, seeing as we had a record number of riders. M25 had 27 motorcycles, nine trucks pulling nine trailers (Merchandise, two hydration, six chase (to assist bikes broken down or riders in need of rest) all followed by an eighteen wheeler to pickup product. (The eighteen wheeler was a new addition, thanks to the generosity of the South Carolina Conference donating the trailer and a business donating the tractor to Pastor Cory Jones of Emmanuel Mission in Lake City, SC) Fifty-two riders and passengers filled the various spots of service, including, drivers, hydration handlers, Chaplains of Platoons, Missing Man, and Emergency and Senior positions). We were blessed to have our National Royal Rangers Commander, one Conference Bishop, a retired Missionary, seven pastors (all but two were IPHC) and leaders from several churches, along for the ride.

We were very busy this year serving water and Gatorade due to the extreme heat, which in turn resulted in our “Chase Teams” being very busy picking up men and women overcome by dehydration and heat exhaustion. There were times we had all six trailers full of motorcycles, stopped at our evening meal and had to go back and get riders left on the side of the road. This meant long, hard and tiring days. There were times when M25 members would not get to their rooms until 10 pm and then have to get up at 5 am to make the next day’s meetings and get things ready. 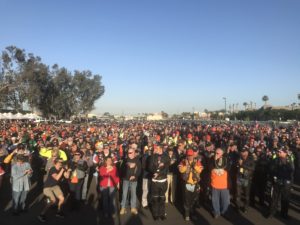 The Hydration Teams handled twelve pallets of Gatorade and over twelve pallets of water. Each pallet weighed in excess of 2,000 pounds and had approximately 1,800 bottles on it. The coolers had to be kept iced down continually to keep the drinks cold. In addition, there were nine pallets of chips and snacks that were handled for each route. M25 also purchased fruit, apples, oranges and bananas for the riders to enjoy. Hydration’s final job was keeping the cool wraps (a wrap that swelled when placed in cool water) for the riders to place around their neck, to help keep them cool. These cool wraps are handmade by war veteran wives and Gold Star Moms.

The Healing Banner, was such a blessing to so many. M25 would like to thank those who found a way to support our effort. Our banner had four GMC ministries, nine IPHC Conferences, ten IPHC Ministries, forty-five IPHC churches, twelve non-IPHC churches, three motorcycle ministries, twelve businesses and twenty-one individuals listed. M25 has witnessed men and women reading the banner with tears exclaiming, “I did not know they cared,” for across the top it says the, “CHURCHES OF AMERICA THANK YOU FOR SERVING.”

On Sunday morning we were blessed by the message of Bishop Larry Herrera on the Southern Route and Pastor Mark Richardson on the Mid Route, which was shared from a flat bed trailer in a WalMart Parking lot. We encountered so many testimonies this year, of the value of our presence for the riders on RFTW. There were stories of men who went home and dedicated their life to the Lord and are now serving in the churches. One such story was a man who was a member of an Outlaw Motorcycle Club; one rider spoke to one of our riders saying, “I was one time a youth pastor and worship leader, I have drifted from that place but after watching M25 and being around you men and women, I have re-dedicated my life to the Lord.” Our witness for all these years has began to yield men and women who turn their life to the Lord. While we all hope and pray all men will be saved, it is M25’s intention to allow that to be their choice, not our selling. We try to live a life as Acts 1:8 states, “you shall be a witness (martyr)….” While we do not die physical deaths, it is our desire to die to our selfishness, and own securities and live the life of Christ so that others may be drawn to Him. 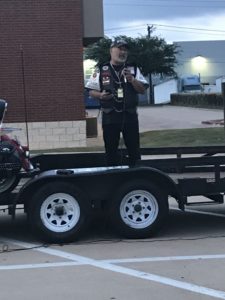 Three IPHC churches, Christian Heritage Church in Amarillo, TX, Journey Church in Siler City, NC, and Shiloh Church in Wilson, NC all tag teamed with First Church in Goldsboro, NC, to feed the riders as they came through. The ribs in Amarillo, steak and homemade ice cream in Siler City, and  spaghetti in Wilson were all a big hit. DRUSA of the North Carolina Conference blessed the Mid-Route with a meal in Fayetteville, NC. One rider raised $1,000 to give to DRUSA for their gift of the meal. Also, Life Changers in Wytheville, VA prepared a steak dinner for the M25 Team on Wednesday night. New Hope PHC in Stanley, VA brought 400 PB&J sandwiches to the riders in Front Royal, VA, keeping the PB&J tradition alive.

Once we arrived in DC, Pastor Robbie Jones of Parkway Christian Center, had his motorcycle ministry, “Christ Decedents” at Lake Fairfax Goodlett Park ready to serve the riders with food and a whole lot of love and encouragement. At Burke Lake Park, Brian and Sherry O’Dett with “Broken Chainz Motorcycle Ministry,” were setup with the aide of Fountain of Life PHC, Elizabeth City, NC. This has been a huge ministry, not only to M25 but to the many people in the park. Most were there for the “Rolling Thunder,” who have come to depend on us being present to help with their meals. This was Parkway’s thirteenth year and Brian & Sherry’s tenth year of serving us in DC.

This report would not be complete without sharing an act by the Mid-Route. Senior Chaplain, Pastor Mark Richardson, who was also the Route Coordinator, felt we should receive an “offering of thanks” for M25. The total was $5,000, for which we were deeply thankful, but surely did not expect them to give. It has been the desire for M25 to be a conduit for the church to say thanks to the veteran. However, the Lord knew we needed that $5,000.

After fifteen years, one would believe the energy, commitment, passion and belief of our efforts would wane, however, this is not the case. Many of the fifty-two participants from M25 have already signed up for next year! It is our belief that passion is “intense feelings, driven by deep convictions.” The deep conviction that drives M25 is the love of our Lord being expressed to thank our veterans for our freedoms, including freedom of religion, which can be lost if even one generation de-values that freedom. Our men and women do not do this because it is fun (while we do have a great time), because they want to cross the USA (while we do cross the USA) or because they want to ride a motorcycle thousands of miles (while they enjoy it and it depends on where they start riding, some fly in after preaching on Mother’s Day), it is truly a mission that we are honored to be included in.