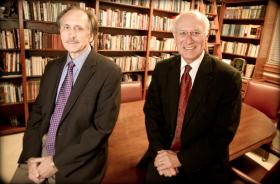 Close to the heart of IPHC Presiding Bishop Doug Beacham is a yearning to engage IPHC scholars more fully into the life of their faith community. At the same time, Dr. Harold D. Hunter has brought IPHC Archivists and friends together for a meal function at every general conference since his tenure began in 1995 as Director of the IPHC Archives & Research Center.The fusing of these impulses opened a new chapter when the first Scholars-Archivists Breakfast convened July 26, 2013 during the 27th IPHC General Conference in Dallas, Texas. The concept of how this new mission would be addressed was introduced by Presiding Bishop Beacham.

The meal was blessed by Dr. Kristen Welch, author of books about IPHC women ministers. Following the meal, Dr. Daniel Woods presented a short paper entitled “Lessons of a Century: Asking Fruitful Questions About the 1913 General Convention of the Pentecostal Holiness Church”. (Click on the link to download this important paper.) This was an insightful and challenging look back at the 1913 General Conference accented with colorful stories. At that event, G.F. Taylor was elected General Superintendent. In 1921, Taylor would become the first official IPHC Archivist.

At the request of Bishop Beacham, each table discussed ways to network scholars and archivists while eating breakfast. Dr. Hunter then moderated when reports were given from each table about how we find our way forward. The benediction was offered by Dr. Vinson Synan, the official IPHC church historian.