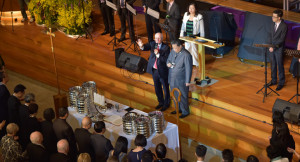 HONG KONG, May 6-8, 2015 — Hundreds of missionaries, pastors, conference bishops and lay church leaders gathered in Hong Kong in early May to participate in the 5th Global Assembly of the International Pentecostal Holiness Church (IPHC). This year’s event was hosted by the Wing Kwong Pentecostal Holiness Church, the largest IPHC congregation outside the United States.

The gathering was marked by a sense of celebration, focusing on the remarkable growth of the Pentecostal movement in Asia. The Wing Kwong church was planted by Pastor Donavan Ng in 1978 with 28 members, yet today it has grown to over 6,000 members. Some of the Global Assembly sessions were held in the six-story Wing Kwong church facility. The IPHC now has 15 congregations across Hong Kong.

On the second evening of the assembly, the IPHC’s presiding bishop, A.D. Beacham, Jr., introduced surprise guest James Hudson Taylor IV, the great-great-grandson of British missionary Hudson Taylor, who ventured to China in 1865 to bring the gospel of Christ.

“God has entrusted to the Chinese church a special mandate for the 21st century,” said Taylor. He reminded the audience that gospel seeds sown so long ago are now producing an unprecedented spiritual harvest in the world’s largest nation. “The Great Commission needs to be completed by the global church, across denominational lines,” Taylor said, noting that his great-great-grandfather recruited missionaries from many denominations to reach China.

The IPHC has played a role in the evangelization of Hong Kong. Missionary T.J. McIntosh sailed there in 1907, and he was followed by Anna Deane, a Pentecostal teacher who established a school there and eventually a church. The work grew even during times of persecution when foreign missionaries were sent home. Today the Wing Kwong Church generously supports missions work and has event sent missionaries from Hong Kong to Africa.

An international flavor marked each of the day’s sessions, especially when Rev. Timotei Bulzan from Oradea, Romania, closed his message by asking representatives from every continent to come to the stage and pray for the advancement of Christ’s kingdom in their native language.

In the closing service at Wing Kwong Church, a Turkish church-planter shared how he found Jesus Christ as a Muslim—and how his own parents had a powerful encounter with Christ after they heard his testimony. Today he is planting churches in Turkish cities where the gospel once flourished in the first century. “Even radicals are being saved,” the church-planter said, adding that he believes a great revival will sweep the Muslim world before Jesus returns.

During the assembly the IPHC also demonstrated its commitment to empowering women leaders. One of the plenary speakers during the event was an IPHC missionary to Africa, Sharon Wooten. She reminded delegates that the only way they can fulfill the mandate to evangelize the world is through deep intimacy with Christ and a dependence on the Holy Spirit. “We need to tarry for the power,” Wooten declared, “and the power only comes through surrender.”

In his closing remarks, Presiding Bishop A.D. Beacham, Jr., called on members of the IPHC to not only seek God for a fresh infilling of the Holy Spirit but also to rely on the Spirit’s power to fight injustice. He also announced that the 6th Global Assembly, scheduled for 2019, will be held at the 80,000-member Evangelical Cathedral of Chile, the mother church of the First Methodist Pentecostal Church of Chile.

The IPHC is now working in 101 countries. Recent statistics show that the church has more than 1.6 million members in 11,336 churches worldwide.