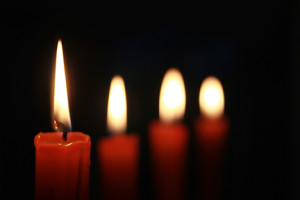 This Sunday, December 27th, is the first Sunday after Christmas. It is also the day when the “three French hens” appear at your front door. Alright, that’s a bit imaginative on my part, but it’s still fun to think about!

In our western-consumer-driven emphasis from late November to the week leading to Christmas Day, it’s easy for two things to occur:

I have family members who actually start taking down the decorations on Christmas Day. After over forty years of marriage, I have convinced my wife to wait until at least New Years! But I’m engaged in a slow and deliberate campaign to win her over to keeping things up through January 6th, the Day of the Epiphany!

There is a reason for all this. The Twelve Days of Christmas begins on Christmas Day and ends on January 5th. Usually, the hustle and bustle of Christmas have taken leave (except for returns and use of gift cards in the malls) and there is actually some time to relax, reflect, and, of course, watch football games. But in reality, this is the perfect time to sit quietly in the morning and evening and listen to Christmas carols while prayerfully reading Isaiah 7-16; Matthew 1, 2; Mark 1; Luke 21:21 through 3:38; John 1:1-51.

It’s interesting that the Christian church historically has remembered the martyrdom of St. Stephen on the day after Christmas Day (December 27 in the Eastern Church). At times, the romanticized views of the birth of Jesus block the reality of life at His birth. We forget He came as an invading King, a clear threat to every human power. We forget He created this cosmos and all that the Hubble telescope and other galaxy traveling missions have seen and have yet to see (John 1:3; Colossians 1:16, 17; Hebrews 1:2, 3). We forget that Satan remains in rebellion against God and that rebellion is manifested in war, violence, poverty, death, famine, and everything destructive of human wholeness, devoid of divine love.

St. Stephen draws our attention to the death of the children in Bethlehem (Matthew 2:16-18). By the way, many churches remember this episode on either December 28th or 29th. Killing children is a most effective way of destroying the future. This is why later in January IPHC members will join with hundreds of thousands who will March for Life in protest against the government supported slaughter of over 57,000,000 unborn children in the United States since 1973.

The martyrdom of St. Stephen, recorded in Acts 7:54-60, stands in sharp contrast to the demonic spirit of martyrdom practiced in the name of Islam. Rather than intentionally killing and maiming innocent bystanders after a shout of praise to Allah, as too often occurs today, Stephen prayed for God to have mercy on those who were stoning him (Acts 7:60). Stephen’s death is like that of Jesus’ death – a death that understands that mercy and love are greater weapons than hatred, violence, and death itself.

Stephen’s death is a great testimony to us as we reflect on the purpose of our lives since Christ has come. We live to share the Good News of eternal life to all who are bound in sin and shame. The Good News is that shame and hopelessness do not have to be the defining word over our lives. There is another Word, an eternal Word that became flesh, Jesus, born of the Virgin Mary that speaks greater than all the words of sin and shame.

I invite you to take the Twelve of Days of Christmas and turn them into a fresh discovery of who Jesus is. When we come to Epiphany on January 6th, where the visit of the Magi is commemorated (Matthew 2:1-12), we enter into a time of recognizing afresh that Jesus is the Son of God, the Messiah of Israel, the Savior of the world, the Lord of glory, and the One who will return to fully establish His eternal kingdom.