I was privileged to attend and preside over a significant conference session of the ministers and congregations of the Harvest Conference. This conference reaches across Kansas, Kansas City, Missouri, and into Iowa. The following photo was taken of the attendees at the close of the Saturday business session. 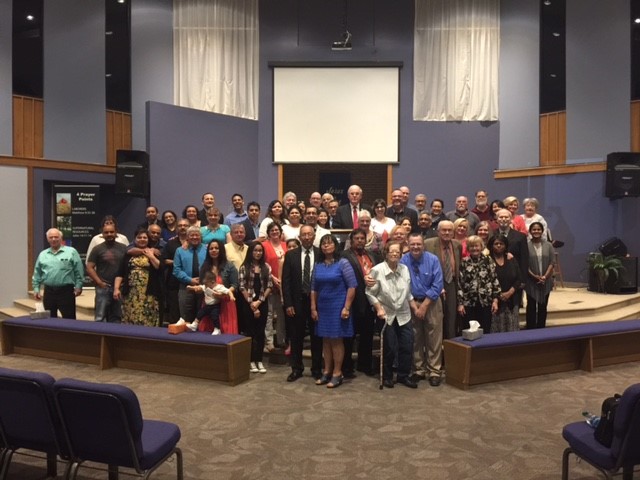 The sessions were held on June 3-4, 2016, at Glorious Life PHC in Derby, Kansas (Wichita suburb). This congregation is led by Pastor Keenan Darnell and is strategically located in this prosperous and growing area of Wichita.

In the photo, you can see former conference superintendent Rev. Elston Page and his wife Lois on the front right in the brown suit. In the center back is Bishop Chris Thompson, IPHC Vice-Chairman and executive director of EVUSA.

A Strategic Shift in Structure

This annual session was the culmination of two years of intense work led by Bishop Thompson, a specially formed conference advisory committee (Revs. Anna Miller, Keenan Darnell, Ricardo Garcia, Barry Morris, and Jorge Tinoco), and the EVUSA team. Two years ago, after several years of decline in the conference, the conference voted to come under Bishop Thompson with the goal of either developing a strategy to remain a viable conference or take steps to consider a different structure as part of a long-range plan.

After two years of engagement with the EVUSA team (and ten trips across Kansas), Bishop Thompson, the conference advisory committee, the ministers and lay leaders of the conference, and the IPHC Executive Committee of the Council of Bishops, determined that the churches would best be served and positioned for future growth with a new structure.

That structure was adopted unanimously in the business session. The structure is as follows:

Throughout this two-year process Bishop Thompson has kept the Executive Committee and the Council of Bishops informed of every step. He has shown his strong pastoral and organizational leadership as he earned the trust of the members of the Harvest Conference and led them to this new opportunity. He and his staff of Rev. Garry Bryant, Rev. Luis Avila, Rev. Stacy Hilliard, Mrs. Elizabeth Jorgenson, and Mrs. Maria Velez, are to be commended for their faithful stewardship.

This process is an effective model from the general church level in working hand in hand with conferences that are facing difficulties. I am grateful the denomination has the flexibility to adjust structures in order to more effectively fulfill the mission Christ has given us.

Highlights of the Conference Event

Through the week leading to the conference, Bishop Thompson and his staff, along with Pacific Realm District Director Greg Hood and his wife Joan, held special services in the areas with concentrations of IPHC congregations in Kansas. This was like a camp-meeting atmosphere as Rev. Hood ministered the Word with great insight, passion, and prophetic anointing. A special prayer was offered for every minister and congregation. Rev. Avila, director of Hispanic Ministries, provided the translation for these services.

I was blessed to attend the Friday night service as Rev. Hood spoke on the “leaven of the Pharisees and leaven of Herod” from Mark 8:11-21. With anointed insight Rev. Hood touched our hearts and minds and led us to search our own hearts in our service to Christ.

During the Saturday conference session, Local Church Ministers License was granted to Rev. Apolonio Lopez, the pastor of a Hispanic congregation in the Kansas City area that has recently joined the IPHC.

EVUSA missionaries Carlos and Nuria Bolanos were present on Friday and Saturday night. They are under assignment to plant IPHC congregations in Hawaii, especially on the island of Maui. Originally from Costa Rica, this couple and their goal is worthy of our prayer and financial support. There are thousands of Spanish-speaking people immigrating to Hawaii and this is a harvest field that we must not ignore. Hawaii is a spiritually needy state with serious homelessness, drug issues, and sexual immorality. I encourage the IPHC family to go to www.acts2day.org to support this couple and others who are reaching the United States for Christ.

Bishop Thompson informed the delegates that IPHC is now in 48 of the 50 United States. We are praying for doors to open in Wyoming and Rhode Island.