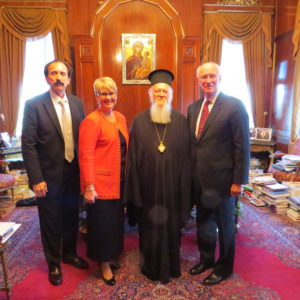 My journey with Orthodox brothers and sisters started with Brighton ’91. With assistance from Monsignor Peter Hocken, I put together this first global conference for Pentecostal scholars. The keynote speaker was Professor Jürgen Moltmann and our presenters were Roman Catholic, Eastern and Oriental Orthodox, Protestant, and Pentecostal. Since that time, I have never put together a conference without Orthodox participation the most recent being Oxford 2012 that featured Metropolitan Kallistos Ware.

In June 2009, I was granted a Private Audience with His All-Holiness Ecumenical Patriarch Bartholomew. One immediate result was the launching of informal talks between the Ecumenical Patriarchate and Pentecostals for the next three years. The co-chairs for these talks were Metropolitan Gennadios of Sassima and myself. I wrote the following in an initial letter to His All-Holiness proposing the talks: “I am emboldened in this quest by reading in your book Encountering the Mystery that Ecumenical Patriarch Jeremiah II broke new ground in the 16th century ‘Augsburg-Constantinople’ encounter. Dr. Paraskevè Tibbs projects that perhaps Melanchthon himself recast the Augsburg Confession in Greek for the benefit of this significant exchange.” This note is heightened as Protestants commemorate 2017 as the 500th year of Reformation.

In January 2017, I put forward a proposal to Ecumenical Patriarch about a way forward for Orthodox – Pentecostal relations. The end result is that informal conversations between Orthodox and Pentecostal scholars will be launched when the American Academy of Religion convenes in Boston late in November 2017. The co-chairs will be Dr. Brandon Gallaher, Lecturer of Systematic and Comparative Theology at the University of Exeter, UK, and Dr. Harold D. Hunter, Director of IPHC Archives & Research Center.

This ministry of reconciliation is taking a page from the Roman Catholic – Orthodox dialogues that were first established in the USA. Using the American Academy of Religion as an annual venue facilitates bringing together scholars who excel in their respective fields. Additional information about Orthodox-Pentecostal relations may be found in A Pentecostal Review of the Biography of Ecumenical Patriarch Bartholomew.