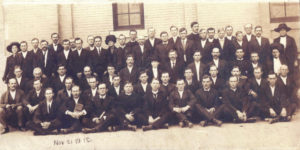 The Second General Convention of the Pentecostal Holiness Church (PHC) was held in Toccoa, Georgia. Although G.F. Taylor is most often remembered for his contribution to formal education, the publishing of books, periodicals, and Sunday school literature, in addition to helping to launch missions with institutional support, 1913 saw him elected general superintendent. When elected, Taylor was a young 31-year-old who dealt with a physical disability. Taylor’s later writings drew attention to the strained debate, voting, and resolutions that ensued in 1913 about divorce and remarriage which, he wrote, had almost derailed the 1911 merger of the PHC with the Fire-Baptized Holiness Church (FBHC).

However, in 1913 the “Colored Convention” was abandoned. Neither were there records of female delegates at the convention. King was elected as a general 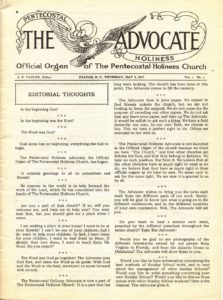 The Pentecostal Holiness Advocate Vol 1 No 1.

trustee after which he asked to be “excused,” but that request was denied by motion. In 1914, King would publish his most significant monograph, From Passover to Pentecost.

The Third Session of the General Convention of the PHC convened January 23-28, 1917, in Abbeville, South Carolina, where J.H. King was elected general superintendent. King had led the FBHC as general overseer from 1900 to the 1911 merger of the FBHC with the PHC. However, his around-the-world tour from 1910-1912 took priority. The fruits of that tour not only produced expansion of the PHC outside the United States, it garnered significant endorsements of King, particularly in Asia and Europe. 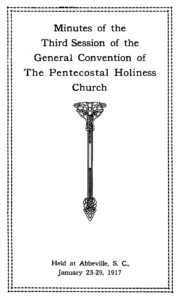 In terms of polity, one could be licensed to preach only if he was able to recite the book of the Bible in consecutive order, and if they had read the Bible through at least once… or at least promised to do so. Ordained ministers were required to read the Bible through twice. In addition, ministers were required to read at least 1,000 pages of books approved by the PHC. A list of specific books and authors, led by John Wesley, was published in the minutes of the 1913 General Convention.