The Graying of the Light

In this guest blog post, Taylor Drake shares his contemplations from his recent trip to Wittenberg, Germany, for the 500th anniversary of the Protestant Reformation.

It was an odd thing to watch the graying of the light as we descended between the ever-darkening layers of clouds. What was once a bright and clear flight had now become ash and soot-colored as we touched down in the paradoxical city of Berlin–a city that boldly tries to outlive the hauntingly grievous recent past by splattering modern fonts and slogans over aged buildings. And yet, it was the further past that brought us presently to this place–a celebration of protesting, of reforming, of such paradigm altering hermeneutics that the waves of that seismic shift are still experienced in every corner of Christendom. However, there was one melancholy thought, planted by a minister, that rested on my mind throughout the days. For many, this would not have bothered them. Unfortunately, I was unable to shrug this conflicting phrase from my conscience as we drove through this water colored city: Hitler quoted Luther.

Now, it is essential to recognize that Luther would neither condone nor accept Hitler’s genocidal philosophies and actions toward and against the Jewish people. Luther desired the Jews find salvation in Christ, whom Luther believed, they did not kill (a vehement counterculture belief in his time). In contrast, Hitler desired the Jewish people be exterminated. In Luther’s vigor, his works did not call for the eradication of the Jews; Hitler’s actions were founded in eradication. Never has Germany possessed such starkly dissimilar figures.

It seemed unfathomable that both Luther, whose bust would mantle upon the pantheon of Christendom’s most invaluable theologians and thinkers, and Hitler, whose venomously infectious ideology of dominance and supremacy which still lingers today, would share a common mental thread: that the Jewish people are not really people. It was here the minister’s words reverberated through the corridors of my heavy heart: Hitler quoted Luther.

The following days were a blur of history, theology, community, and story after story of God’s great presence in the variously represented denominations in attendance at the Wittenberg Congress. IPHC leaders and my own conference’s executive council was there (in its entirety) and we mingled with Nazarenes, Lutherans, Presbyterians, and others in our branch of Christianity. We gathered to celebrate the defiance of one man, and how he, through a new doctrine, brought Christ to the masses in an accessible and personal manner. We are the children of the Reformation–and we came to rightly honor our father and mother. In this collage of denominational men and women, in spite of color, tongue, or creed, we chorally and authentically affirmed the defiantly Protestant doctrine that man is saved from his sins and their consequences by faith alone.

I pray not for the harvest; I tarry for laborers. – Dr. Timothy Hill

What does the church look like when it stops building walls? – Dr. Glenn Burris

You sow yourself into others. – Dr. Alex Mitala

Our call is not to filthiness, but to holiness. – Dr. Samson Ayokunle

We are preaching answers to questions no one is asking. – Dr. Leon Fontaine

Tribalism is the perversion of the biblical function and purpose of tribes. – Dr. Gustavo Crocker

The reading aloud of Scripture is the soundtrack to life. – Dr. Leonard Sweet

If you want to plant something that lasts for a season, plant flowers; a lifetime, trees; forever, churches! – Dr. Suliasi Kurulo

After you read a book 100 times you can immediately understand it. – Dr. Byoungho Zoh

I melted. I cried. I said that if this is God’s will, I will go. – Dr. David Sobrepena

I have not enough sole to tread through the heart of Berlin. A few days were far from enough time to drink in the culture, the tastes, the atmosphere of this odd city. The monolithic concrete remnants of the Wall grasped at pedestrians’ feet, as if blades of grass seeking nourishment under the steely branches of industry and national progress. The minimalism of the BauHaus movement, a movement that revolutionized the architectural, appliance, and art spheres of modern ascetics, continues to drive forward at an unrelenting pace. The monument to the Holocaust, a city square block of hundreds of concrete coffins systematically arranged to imitate a claustrophobic cemetery, brought me to tears as I stood in the literal and figurative shadows of one of humanity’s greatest stains. And then to Wittenberg.

The rain drowned trees, parted by a medianed asphalt path, led us to the womb of our great heritage of protestation. The Germanic countryside regularly reminded me of a casual blend of Ozarkian groves and Carolinian shrub. Moss and leaves bled across the never bare forested terrain, as we snaked amid the flat Great Woods. This was the landscape of Luther’s thoughts and words – how I wished to wander with him between the canopied heaven and soiled earth, longing to hear him speak.

Scattered lamps and headlights littered the sable silence as we meandered through shadowlands bathed in the thickening fog. The service had followed a similar evangelical pattern, with some minor revisions: an opening song (in Latin by an Asian choir), the welcome and greeting, the sermon (of which there were three), another song (A Mighty Fortress is Our God), announcements, thank yous, and then dismally through the door.

The Door. That Door. Luther’s Door.

A once wooden door replaced centuries past on firmer hinges, which now hung and swung, etched in his native tongue, Luther’s 95 Theses. The experience was humbling – I cried as I touched the foreign words. History was, at this moment, tangible under my trembling fingers. I dare not ruin the moment by trying to describe its significance to me – but I know that God heard my thankful prayer under the great shadow cast by this portal.

During the service, a new thought took root in my mind, a thought that germinated and festered as an open wound as the speakers spoke and the congregation listened. A thought that now brings comfort to me–and as we departed from not only the church, but the city, the country, and the continent, the comfort of this new thought brought peace to my heart.

Yes, Hitler had indeed quoted Luther. But did not Satan use the words of God to the Israelites in his temptation of Christ? 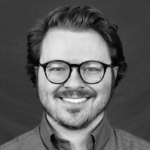 Taylor Drake is a graduate of Southwestern Christian University and currently serves as the director for multimedia, camp, and Timothy Ministries for New Horizons Ministries. He also teaches filmmaking at Augustine Christian Academy. He and his wife Ashlie live in Tulsa with their two daughters.