Love One Another: 2019 National Day of Prayer

“Love One Another,” echoing the words of Jesus in John 13:34, marked the theme of the 68th observance of the National Day of Prayer (NDP). The May 2, 2019, gathering of several hundred people from across the prayer community took place in Statuary Hall, in the United States Capitol in Washington D.C.

In his passionate presentation of the NDP theme, Dr. Floyd called on the nation to cry out to God together for America, asking that the heart of our nation be transformed. He called love “the badge of Christian discipleship” and said that “love is the better way, the supreme test in all relationships. It is our highest duty to God and our highest duty to one another.”

Dr. Floyd asked each physically able person to kneel in humility, repenting of sinful hindrances, asking God to prepare hearts to pray. Five-minute presentations on a specific prayer focus and concentrated prayer around each focus followed the time of personal repentance.

Rev. Samuel Rodriguez, senior pastor of New Season Christian Center in Sacramento, California, and president of National Hispanic Christian Leadership Conference, spoke on “Accepting One Another.” He said, “We are driven, compelled, and required to love one another.” Bishop Harry Jackson led in a corporate prayer of repentance followed by one-minute prayers from five other leaders.

Rev. Anthony B. Thompson, author of the upcoming book, Called to Forgive, spoke on “Forgiving One Another.” He asked the question, “Can you love your enemies?” He went on to tell how God asked him this question after his wife was killed in the June 17, 2015, mass shooting at Emanuel African Methodist Episcopal Church in Charleston, South Carolina. His powerful testimony of love led into “Prayer for Forgiveness” led by Dr. Kie Bowman.

The program also included prayers for America’s executive, legislative and judicial branches of government, and the American military. 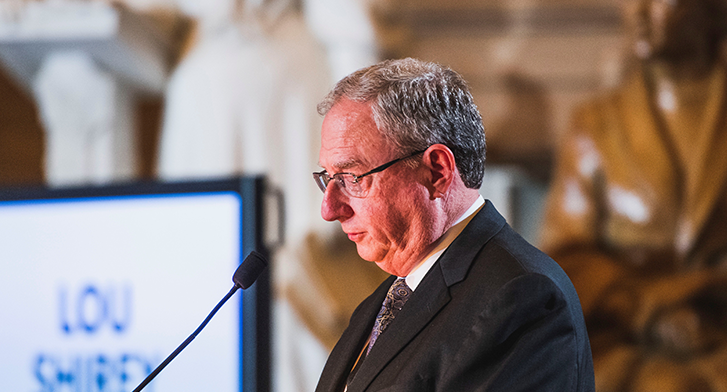 Chaplain (COL) Lou Shirey (U.S. Army Retired), IPHC director of World Intercession Network and Clergy Development, led in prayer for the military. He began by quoting John 15:13, “Greater love has no one than this: to lay down one’s life for one’s friends” and continued by asking God for protection for those serving actively, and for their spouses and children. Dr. Shirey prayed, “Father, may we always depend on you for our country. We thank you for our strength, but we place our trust in you.” In closing, he made an appeal for selfless leadership.

Andrew and Norine Brunson, missionaries to Turkey, presented the focus on “Praying for the Persecuted Church.” Andrew Brunson was arrested and incarcerated in a Turkish prison for two years. Eventually, he was released through diplomatic efforts of the United States government and prayers of Christians throughout the world.

In introducing the Brunsons, Dr. Floyd asked for everyone present who had prayed for Andrew’s release to stand. The entire assembly rose to their feet, testifying to the power of unified prayer.

As he recounted his experience in prison, Andrew alerted Christians in the Western world to expect persecution. He quoted his mother who said to him after his arrest, “Andrew, there’s a long line of people who have suffered for Jesus. It stretches back more than 2,000 years. It is now your turn to stand in that line.”

Tony Perkins guided the prayer for the persecuted church. He prayed that no one going through persecution would feel they have been forgotten. He quoted from 2 Corinthians 4:9 where Paul wrote, we are “persecuted by not forgotten.” He prayed, “May we stand with them in solidarity.” Tony serves as commissioner of the U.S. Commission on International Religious Freedom and president of Family Research Council.

Diane and Jay Strack presented a “Call to Action.” They expressed, “Prayer will change our culture, not legislation. Intercession joins hearts.” Diane said, “Love is not silent, and neither are we.” She is one of the organizers of She Loves Out Loud and the co-founder of National Women’s Prayer Movement; Jay is the founder of Student Leadership University and LIFT.

Kathy Branzell prayed for a love one another movement to sweep America and that the culture would be saturated with love. “May every living room, boardroom, classroom, courtroom, every green room, newsroom, war room, and dorm room” make room for the Holy Spirit to fill them with love. Kathy is the national coordinator of Love 20/20. At the end of May, she will follow Dr. Floyd as president of National Day of Prayer.

Nick Hall, founder of PULSE, joined the NDP observance by livestream. More than 4,000 young people were gathered with him in Mariucci Arena in Minneapolis, Minnesota, as he gave an impassioned evangelistic message for salvation.

Dr. Floyd closed with a “Call to Great Awakening in America.” The assembly gathered in Statuary Hall prayed in unison the National Prayer written for the May 2 event. 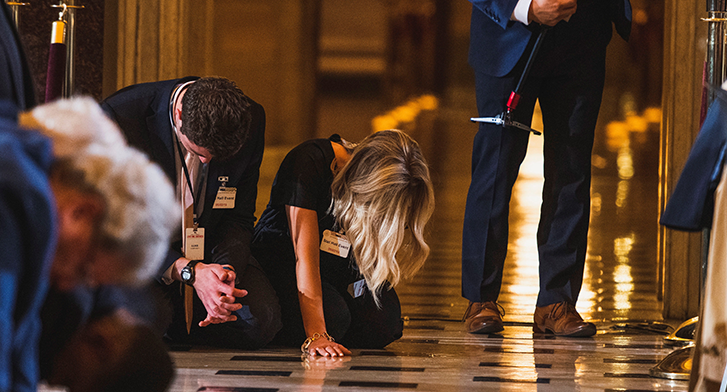 The national observance of NDP culminated with a day in which more than an estimated 50,000 local and state observances occurred throughout the United States. The Statuary Hall event was broadcast by Day Star Television, God TV, radio and internet outlets, as well as Facebook Live. Estimates are that millions of people in the United States and throughout the world joined together in prayer.

The National Day of Prayer was created in 1952 by a joint resolution of Congress and signed into law by President Harry S. Truman. In 1988, the law was unanimously amended by both the House and the Senate and signed into law by President Ronald Reagan on May 5,1988, designating the first Thursday of May as a National Day of Prayer.

The National Day of Prayer observance in Washington, D.C. completed a week of activities surrounding the important event.

On Wednesday night, Vice President Mike Pence, accompanied by his wife, Karen, addressed the NDP dinner event at the Museum of the Bible. Following the evening dinner, Dr. Floyd interviewed Andrew and Norene Brunson. Their testimony inspired and encouraged those assembled with God’s faithfulness. The evening was capped with prayer for the upcoming National Day of Prayer events across the country.