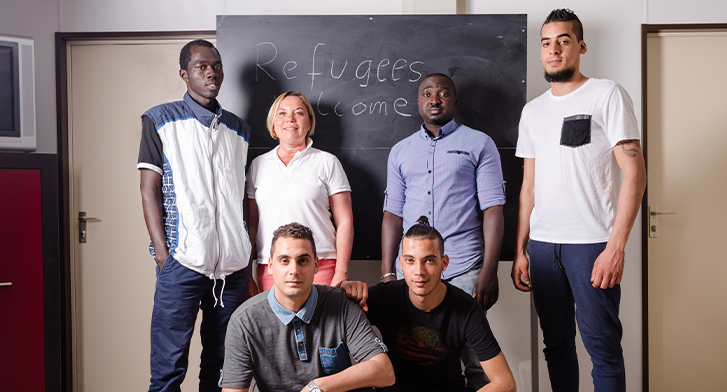 When the Refugees Come, Be Ready With Open Arms

Jean Pierre Gatera stood in front of a group of Rwandese soldiers, awaiting execution. The solders had mistaken him for a rebel and were holding him until nightfall. “I prayed, telling God, ‘If you exist, if you help me from here, I will serve you,’” the pastor recalls. “And because He is just, He rescued me.”

Gatera’s life reads like a modern-day account of Joseph. He was born as a Burundian refugee and grew up in Rwanda. In 1994, Rwandan civil war broke out and his family fled the violence and genocide. Jean Pierre, who was away at school, was left with no way to contact his family. He had no home, no possessions, and no documentation. He walked hundreds of miles, searching refugee camps for his family, and seeking asylum for himself. He ultimately made his way to Kakuma Refugee Camp, located on the border between Kenya and South Sudan. For the first three years he tried unsuccessfully to gain refugee status so he could receive provisions from the United Nations.

“I was not recognized as a refugee simply because the leaders did not believe I was Burundian,” he recalls. “Every Saturday for three years, I’d go to a local mountain and pray for God to intervene in my situation.” In time, God did miraculously intervene. A house fire led the police to inquire why he had no documentation. When they learned he’d spent three years being shuffled around the system, he was sent to Nairobi, Kenya, where he interviewed, received proper documentation and provisions, and gained refugee status. During the three years Gatera was awaiting documentation, he gained something much more valuable – a spiritual calling.

Members under Rev. Tito, an IPHC minister living in the camp, took Gatera in and provided food and shelter. He began attending church services and revivals; at one meeting, a visiting pastor shared a personal story of persecution. Gatera walked down the aisle that night and accepted Jesus Christ. From that day on, he carried out the promise he’d made when God delivered him from execution years earlier.

Salvation shifted Gatera’s perspective. He realized being a refugee did not mean he was resigned to a life of poverty and hopelessness. “God put me onto the world stage, because that is where I belong,” he says. He completed his education at a camp school, then attended Kakuma Interdenominational School of Mission and was ordained as an IPHC minister.

Gatera began to accompany his pastor to leadership meetings and ministerial gatherings in the camp. It didn’t take long for other camp ministers to recognize his gifting as a leader. The man who came to Kakuma without education or documentation became chairman of the United Refugee Churches. Pastor Gatera spent 14 years overseeing dozens of churches in a camp housing more than 185,000 refugees.

Gatera’s life and work within Kakuma have given him a unique perspective. Where others see a hopeless humanitarian crisis, he sees an opportunity for global ministry and latter day evangelism.

“We are 70 million people on the move,” he says. “There is a need for a shift. That is a key issue to understand in terms of evangelism and missions. If those people can be reached, the world can know Jesus.”

While refugees may spend decades in a camp, as Gatera did, the goal is to move to a permanent residence. Some remain in the country where they initially gain refugee status; some go back to their home countries when peace has resumed, and others are placed in new countries around the globe as part of resettlement programs. Gatera believes if refugees can be trained as ministers while they wait for placement, the church will be more successful in global missions and church planting. He envisions a day when the IPHC has a department dedicated to working with and training refugees.

“If refugees are trained effectively, they can go into countries and start churches and serve in ministry,” he says. “If there is an effective mechanism, the IPHC can partner ministers with needs, and the church can expand in a tremendous way.” For almost 20 years, Pastor Gatera built a life in the Kakuma Refugee Camp. He married, started a family, led ministries, and trained leaders. Yet he was still a man without a home. In 2016, after 14 years of praying and patiently applying for relocation, Gatera and his family were invited to relocate to the United States.

Today, he still ministers to refugees, although his work looks different than it did in the camp. “I believe that what I passed through is the outlet for me to help other refugees. I can help them pass through the same situation,” he says. Gatera works as a janitor; he uses the rest of his time to mentor other refugees settling into life in the United States. He helps them navigate paperwork, connects them to services, and ensures they acclimate to a new culture and social structure.

Gatera also sees his experience as an opportunity to educate others. “I can help other people to understand the refugee situation,” he says. He believes the American church should be more intentional in reaching out to refugees. And he believes media reports often lead to fear and misconceptions that drive a wedge between churches and refugees.

Many refugees, Gatera says, have an education, leadership experience, and insight that can be assets in ministry. But it can be hard to find a church that welcomes or wants to partner with them.

In his own community, misunderstandings and church regulations about baptisms and credentials led refugees to start their own church service rather than integrate with established congregations. Gatera hopes that by sharing his story, he can help to overcome these misinterpretations and build a bridge between churches and refugees.

From preaching and training in the African desert to waxing floors in Minneapolis in the winter, Gatera sees God’s hand on his life. He is committed to living out his calling wherever God places him. When asked if he would change anything about his past, he says: “There is no way you can change your story. You can only learn to make things better. There are two options: to learn from your experiences, and to help teach others.”