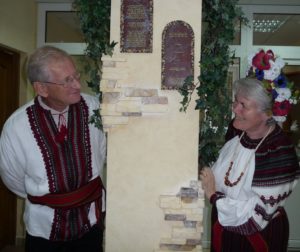 As we are preparing now to go to Botswana, Africa, my mind slipped back to our time in Eastern Ukraine. When we ministered there, it was still peacefully quiet. Now the people are in a war situation. I often wonder what happened to our friend Alexander.

Sometimes you have to make a quick decision. An opportunity to witness for the Lord can fly away very fast. It flashed through my mind, “what shall I do?”

Alexander came straight for our table, obviously drunk. Compassion gripped me, when I looked at his big frame. Inside of this man was a yearning heart, I knew for sure. He loudly asked if he could sit next to our translator. I looked at her and saw she was o.k. She had been a missionary in Siberia and was used to a whole lot worse situation. Alexander gripped our hands and squeezed them, in the meantime telling us that “he would pay the bill!” We brushed it off and answered some of his questions about Canadian ice hockey.

The Lord prompted us to get to the point, so we asked Alexander what he knew about God. He told us, quieter now, that he was brought up with Communism and that his god is the state of the Ukraine. I had to hide my shocked feelings. Never had I heard such a statement before. We were deep in the heart of Communism in the east of the Ukraine.

We proceeded to talk about our God and his Son. Alexander did not agree, but every time he said so, he shook our hand, because he did not want to upset us. He did not know that we are not easily offended, especially not after he started to gallantly kiss my hand right over the omelets.

It was a happy time, but also such a sad time. My heart ached for this big man. He told us he was the “second” man in the coalmine and “wealthy”. He frankly told us his sins. Then I asked if he was not afraid of an accident in the mine. Where would he go if he died? His eyes became dark and he looked at me angrily. “Do not talk about accidents ever again!” His voice quivered. Alexander lived in fear. Later, when he kissed my hand for the last time, he asked me if I wanted to go in the mine the next day. I graciously declined, as I explained to him that I did not like to be transported half a mile below the earth in a little iron cage that was built one hundred years ago. I surely am no hero regarding mines and small Ukrainian elevators. Of course, he understood.

A week later, when we were back in Romania, I poured out my heart again to Alexander in a letter. “Please, Sasha (his nickname) make sure you will join us in heaven. Believe that Jesus died for your sins! Come with us Alexander. The time is so short.” Three weeks after we left the area, 100 miners died in a mine blast close to Alexander’s mine.

Will you pray with us for Alexander, that his soul will be saved? Also for the many students we are going to train in church planting in the months ahead in the south of Africa, that they will faithfully start to plant new churches!