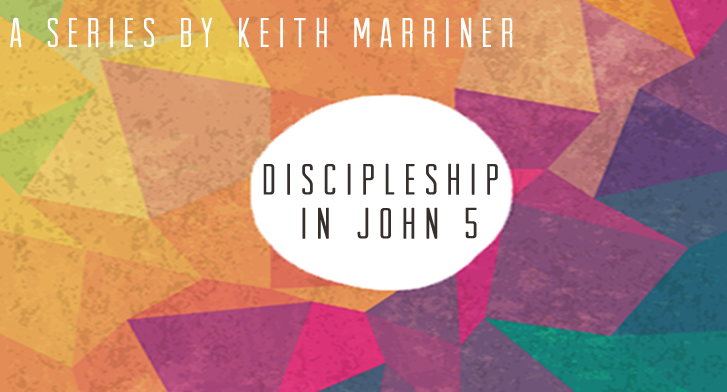 Today we continue with our look at the theme of discipleship in the Gospel of John. Some time later, after Jesus performed his second sign in Cana of Galilee, he and his disciples went to Jerusalem to attend one of the Jewish festivals (John 5:1). While in Jerusalem, Jesus went to a pool near the Sheep Gate, “which in Aramaic is called Bethesda” (5:2). Five colonnades covered the pool. Gathered at the spot were several people who were disabled, “the blind, the lame, and the paralyzed” (5:3).

There appears to have been a tradition that believed an angel of the Lord was responsible for stirring the waters, and that somehow this action resulted in the healing of whoever was first to lower themselves into the water. The NIV, as well as many modern translations, exclude verse 4 based on insufficient textual evidence. Verse 4 was likely at one time a “marginal gloss,” a marginal note intended to explain the reason for so many infirmed persons gathered around the pool waiting for it to be stirred (Ridderbos, The Gospel according to John, 185). Eventually, some later manuscripts included this content that resulted in verse 4. In all likelihood, the bubbling of the water was caused by an intermittent spring that feed into the pool. Some ancient manuscripts even note the redness of the water, which was believed to have had medicinal qualities (Carson, The Gospel according to John, 242). Regardless of the precise reason for the perceived healing quality of the pool, a tradition was established that led to several persons gathered around it in hopes of being healed.

Jesus singles out one individual, a man who had been lame for thirty-eight years (5:5). This man had been in this state for most of his life. Most persons only lived to around forty years of age. He like so many that had gathered at Bethesda was hopeless. After finding out a bit about the man, Jesus asked him if he wanted to get well (5:6). The hopeless state of the man is revealed in his response. He does not say, yes, but tells Jesus’ of his helplessness to lower himself into the water. He does not recognize what Jesus can do for him. In turn, Jesus replies, “Get up! Pick up your mat and walk” (5:8). Immediately, the man becomes strengthened in his legs, takes up his mat, and begins to walk (5:9).

John includes almost as an aside that this event took place on the Sabbath. Because of this, the Jewish leaders, seeing the man who Jesus healed, questioned why he was carrying a mat, and therefore, according to their tradition breaking the Sabbath (5:10). The man replies that “the man who made me well” told me to do it (5:11). The Jewish leaders ask for the name of this person, but the man had no idea (5:12-13). He had not even taken the time to learn Jesus’ name, the very person who ended his thirty-eight years of misery.

Later Jesus found the man in the temple precincts. There he confronted the man, “See, you are well again. Stop sinning or something worse may happen to you” (5:14). The man was clearly not at the temple to worship. What sin Jesus has in mind is not stated. Jesus’ words seem to indicate that the man was living in a state of unrepentant sin. After Jesus corrected him, he returned to the Jewish leaders to inform then that it was Jesus who had made him well (5:15).

Does this man, conceivably a former paralytic, whom Jesus healed, display any of the qualities contained in the paradigm of discipleship? In a word, No. The man shows no indication of becoming a disciple of Jesus. In fact, when Jesus finds him, his words are not an encouragement to follow him, but are meant as a warning. The man should fear something far worse than being unable to walk; he should fear eternal punishment. After this warning the man does not have a change of heart. Instead, he seeks out the Jewish leaders to rat out Jesus. This narrative shows all too well that the performance of a miracle does not necessarily lead to faith in Christ. Even this one who was healed in this instance, shows no indication of moving toward saving faith. Just the opposite appears to be the case. This should serve to temper some who think that divine displays of power automatically lead people to believe in Jesus. Nothing could be further from the truth.

Keith Marriner joined LifeSprings in 2009 and serves as executive editor of all IPHC Sunday school curriculum. Prior to that he served at Emmanuel College in a variety of roles, and continues to serve as an adjunct professor in the School of Christian Ministries. He received a B.A. in Christian ministries from Emmanuel College and an M.Div., a Th.M., and an Ed.D. in Christian Education from Southeastern Baptist Theological Seminary. Keith resides in Franklin Springs, GA with his wife Jennifer and their two daughters, Cora and Eleanor.