“Get ready! Here they come!”

The children came streaming out of the van with giant smiles on their faces, feet pounding the pavement as they made their way toward the tarps covering the ground. The adults, clad in blue t-shirts, were just as excited to greet each child by name and freely give out hugs.

Landmark P.H. Church in Kershaw, S.C., has an incredible Sidewalk Sunday School ministry. Some weeks they draw in as many as 100 children, coming from some of the most underprivileged neighborhoods in town. 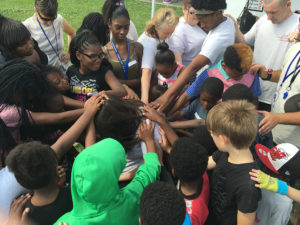 We came as observers, as learners. Our church, Emmanuel P.H. Church in Lake City, S.C., is preparing to launch our own Sidewalk Sunday School. We visited Landmark to see the logistics of running this type of ministry.

As the music blared through the speakers, volunteers directed the children: Boys on the blue tarp; Girls on the silver tarp. The children began dancing and jumping, getting their wiggles out during Praise & Worship. The program was fast paced to keep the kids’ attention: Worship, Pledge, Rules Review, Fun & Games, More Worship, Lesson, Lunch.

When I first saw him, he was holding a volunteer’s hand, smiling with joy as he danced. I couldn’t determine his age, but he had a big smile, made bigger by the two top teeth that were missing. He seemed small and thin, but happy.

Then, I saw his shoes.

They were black high-tops. Ragged and falling apart, they should have been thrown away long before that day. The left shoe had no laces and the toes were threadbare. They may not have even been the right size for his feet.

I later learned that he came from a home with a history of domestic violence. When he’d first started coming to Sidewalk Sunday School, he had burns on his arms – when he was “bad,” his parents punished him by holding a hot curling iron to his bare skin, searing in an unforgettable lesson.

Over time, as he attended Sidewalk Sunday School, his home life improved. The punishments stopped and the skin healed – but the scars were still visible.

As the children laughed and danced on the tarps, he found our pastor. Cory had been a lay leader at the Landmark church when God called him to our small congregation two hours away. “This guy is my buddy,” Cory told me. I watched as he grabbed Cory’s hands, holding tight and smiling his big, toothless smile.

I looked down at his feet again. They were planted in the same posture as Cory’s.

Little feet, imitating the big feet firmly planted behind them.

Little hands, holding the big hands that showed gentleness when all he understood was anger.

Little eyes, watching the lesson intently as he learned about Saul’s conversion.

A little stomach, full of sandwiches and the Gospel thanks to churches that provide more than just a free meal to children.

A little life, forever changed because someone brought Jesus to him – instead of waiting for him to “come to Jesus.”

In every community, there are little feet waiting to follow in the footsteps of Christ. But, they’ll never hear the Gospel unless you share it. Are you willing to take the step of faith to see that beautiful feet encounter the Father? 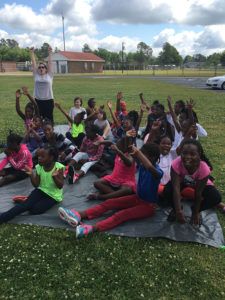 EPHC launched Kidstreet Sunday School April 16. In the first four weeks, they have averaged 60 in attendance. In addition, several donors have stepped forward to provide a meal for the children each week.

“The response from the community has been incredible,” said Pastor Cory Jones. “We’re meeting on public school property. Churches and businesses are asking how they can get involved. It’s humbling to see what an impact this ministry has already made in this town.”

Megan Alba is a lifelong member of the IPHC. She is an adjunct professor of English at Southwestern Christian University and a freelance communications professional. She and her husband, Angel, attend Emmanuel PHC in Lake City, S.C. They have two children.