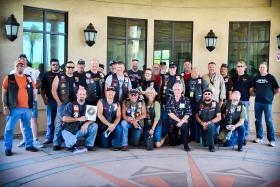 Run For The Wall Riders
The 2014 Run For the Wall was an amazing event. I want to say thank you to everyone that participated. We traveled 6,523 miles, many of us on motorcycles. Some drove and hauled bikes to California and the pastors who worked with us were all flown in due to the day of departure being Mother’s Day.
M25 has a mandate to serve without preaching, we call it BALNAM (Be A Light Not A Mouth). We simply wait for other riders to ask us for prayer, in the pattern of our Lord’s ministry on earth. Even in the face of hell, hanging on the cross, Jesus waited for the thief to cry out to him.
While at times we are broken riding down the road, seeing so many who have sacrificed so much and need so much from our Lord, we know the Lord is working in silent ways. We want to ‘witness’ to them, ‘pray for them’ but we know they have heard it all and many of them have some type of religious experience from their past. We do our job and wait for them to respond. This year we saw more opportunities than ever to share our faith, prayers and love with the riders. One man stated, “You are men of faith that live your faith without judging or condemning or trying to change people. If I had met you years sooner I might be a believer today.”
A total of twenty-five people left California wearing a new vest that carried the back patch of RFTW on top and Mission:M25 on the bottom. It was a sign that Mission:M25 was there to honor and support Run For The Wall. That was such a blessing and it was well received by the run.
Mission:M25 broke into three groups and served the Central, Mid and Southern Routes from Los Angeles to Washington DC.
The Central Route is the most Northern Route we take on RFTW. We sent the smallest of all teams on this route, two men, and one truck and hydration trailer. We served hydration, water, sports drinks, snacks and fruit. We received great reports of service by the team, led by Sgt. Rock, Rev. Stephen Walker of Amarillo and Danny Stewart of Amarillo.
In the Mid Route, we served in several capacities. I was blessed to speak at the morning service and serve as the Senior Chaplain. Additionally, we provided a Missing Man Chaplain, John Howard, an Emergency Team, Gary Whaley and Steve Dixon, a Chaplain Corps, Mark Richardson, Alan Atkins and Gail Glick, a Chase Team Driver, Carolyn Burd, and a Hydration Team, Tom Jones and Wayne Branhoover.
Also, numerous churches and conferences of the IPHC physically participated in serving meals as well as financial support. I was so honored that so many of our conferences, churches and individuals were willing to get involved. Many of them served us a meal at the VFW and they all worked hard to make our visit special.
In the Southern Route, we served in the following capacities. The Senior Chaplain and M25 Leader was Wes Alvarez. We also had a Missing Man Chaplain, Bo and Debbie Pearson, an Emergency Rider, Darryl Peters, a Chaplain Corp, Kevin McBride, John Gibson, Jerry Plent and Jeff Kestner, an Advance Chase Driver, William Rice, two Chase Team Drivers, Frances Degrote and Brandon Gables, and a Hydrations Team, Michael Dodson and Matt Allen.
This route was the oldest to us. Our men and woman did a fantastic job again this year. There were many testimonies on this route where we saw the Holy Spirit open doors. Retired Chaplain Jerry Jones was the speaker at the service in Dallas TX and as usual did a fantastic job.
In conclusion, on behalf of Mission:M25, I would like to express appreciation to the Denominational leaders of the IPHC. I would also like to thank all the Conference Bishops that were able to support our efforts on RFTW. Many stepped up to the plate and supported us financially. I also would like to thank all of the IPHC churches, which donated approximately 85% of all the funds that made this event happen. We are so blessed to be able to be your boots on the ground. The IPHC is the only visible denomination on Run For The Wall.
Thanks to everyone who participated in this amazing event. I am so honored and fortunate to be able to play a part in this amazing outreach. Thanks to every person who got involved, no matter what your role. You were a blessing.