On the cool, windy morning of June 6, 2015, bikes started gathering in the compound at Ft. Lee in Kingston, ONT, Canada. The grounds had a sacred feeling due to it’s 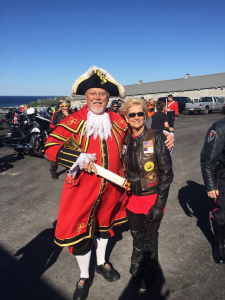 historic setting. The blood that was poured upon the grounds during battle seemed to silently scream, respect. The Town Crier (Pictured with Carolyn Burd) rang the handheld bell and called us to order. In the opening remarks of welcoming the Heroes Highway Ride, he welcomed M25 ‘Ministry of Hope Riders’ from the USA. Only six of us were present but we were so blessed to be honored in this kickoff for an event of this magnitude. Heroes Highway Ride was started in 2009 by Lou DeVuono, who was moved as he viewed the body of a young soldier killed in the War Against Terrorism. He organized a ride to never let them be forgotten and to honor them. It is similar to our Rolling Thunder Ride in Washington DC every Memorial Day Weekend. One of our M25 heroes, Stephen Walker aka Sgt Rock was blessed to lead us into Trenton. 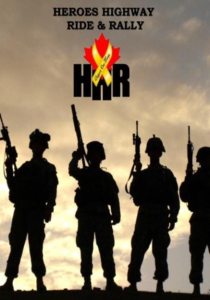 We roared from the walls of Ft Lee and headed to Trenton Air Force Base where all fallen soldiers are flown, then escorted under by the military to Toronto on Highway 401. We joined approximately 1,100 motorcycles toward Whitby for a big program of honoring people. Late in the afternoon, M25 and the Pledge Riders (the Jewish riders we annually stand with) all headed back to Kingston for another nights rest. 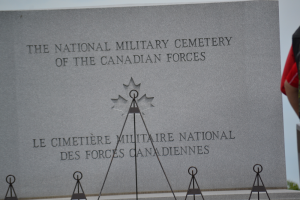 museum and from there parades to the National Cemetery for a ceremony complete with Parliamentarian members, an active General in the military and many dignitaries. The honoring of the fallen soldier of the Canadian Military Force is so important, for as stated over and over, the worse thing that can ever happen for a fallen soldier is to be forgotten.

Again, Mission:M25 was honored to be listed on their website as supporters of the event and Gary Burd, National Director  (pictured to the right) was given the extreme honor of praying for all past, present and future soldiers in the two great nations of the USA and Canada. When the prayer was concluded there 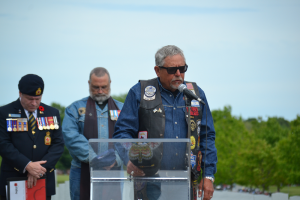 were some ‘amens’ and ‘that’s right’ spoken quietly but heard.

As the ceremony was concluded, Carolyn Burd’s picture was captured with the “Mother” of the cemetery as she, at the age of 86 years of age made her annual ride around the cemetery. 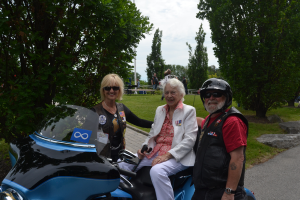 Mission:M25 is so thankful for the support of the IPHC, at all levels and all the individuals who made this trip possible. M25 has been honored over the past eleven years to take the message of “HOPE”, present and eternal to such a wide variety of people. We live under the mandate of BALNAM (Be A Light Not A Mouth), where we attempt to live life of ‘righteousness, peace and joy’ that brings hope, anxiously awaiting the opportunity to live out 1 Peter 3:15, ‘…. be ready always to give an answer to every man that asketh you a reason of the hope that is in you with meekness and fear’.