They came, some by air, some by truck, some by motorcycles and some by car, from ten states. It was three days of fellowship, to learn from each other and to be lifted by the ministry of our Lord, through His power working through each one of us. This is a bi-annual event that takes place in the birthing place of Mission:M25, Christian Heritage Church and also hosted by Great Plains Conference.

Friday night started off with a West Texas Barbecue cooked by none other than Fred Lerch of Christian Heritage and the meat provided by Hard CORE Motorcycle Ministry. As the approximate 100 attendees wiped the sauce off their chin, the National Director, Gary Burd aka Shepherd, introduced the National M25 Board of Directors and presented them a gift from EVUSA Division Bishop, Rev. Chris Thompson. The evening was filled with exciting news of the next year’s National Events, 50 CC Diaper Run; Harvest Train Parade; March for Life Rally Rides; Run For The Wall; Hoka Hey; Never Again Rally and Free Camps. The evening concluded with a challenge for all to never substitute “Instruction for Intimacy” with our Lord.

Bikes lined up under the bridge

Saturday morning began at 8:30 with donuts and coffee, provided by “The Refuge” (Homeless Ministry of CHC). At 9 am sharp, Rev. Greg Sanderson had the praise team all ready to take us to the throne in worship. After everyone participated in the joy of singing to our Lord, Bishop Scott Hampton greeted the crowd and welcomed everyone. Then Rev. Craig Lawlis gave us “Five Works of Grace” that we can do as we watch our values be eroded away. He concluded with us being challenged to step it up in our ministries and / or find new and innovative ways to make the enemy pay. We don’t just set down and ‘take it’!

Class under the bridge

The iron horses were then mounted and others jumped in vans and we traveled to the following locations, where we were shared how we all do our ministries:

1    Under The Bridge, Gary Burd shared the story of the beginning of Mission:M25 to the homeless and eventually other broken people groups under this bridge on a snowy day in January 1999.

2    Then on to “The Refuge” where we had several share how they do homeless ministry. At this location there are approximately 80,000 meals fed every year for the past 11 years.

3    From this point the “PAC” House was visited. Here we shared how each one of the participants minister in the prisons. CHC uses this home to house men released from prison.

4    A lunch at one of the local Biker Bars was then enjoyed. It was a time of connecting with each other and at the same time allowing the biker community to see a bunch of Christians from all over the country interact with each other.

5    The journey to the kickoff location for Biker Sunday was just a few blocks, “Skooterz”. At this point we had several share their biker ministry stories.

6    A few blocks away we found a cool shade at a park where we recorded various methods  churches use to reach out to the children of the community, Free Camp, Sidewalk Sunday School, Bus Ministry, etc.

7    Finally we traveled across town to the War Memorial Site where emotions were high as we spoke of Ministry to our soldiers and veterans. The highlights were Lt. Col. Julie Simoni (currently serving as a JAG Officer in Virginia) and Sgt Stephen Walker aka Sgt Rock, Purple Heart recipient who both moved the crowd.

We concluded with free burgers at a concert sponsored by “Full Armor Biker Church” from Decatur, TX that planted a Biker Church in Amarillo the next Thursday. It was a most rewarding and exciting day. Greg Khun came from Oklahoma and recorded all sessions because our plans are to have all the videos produced for future training.

Sunday morning started with Biker Sunday, sanctuary filled with motorcycles, a crowd estimated between 600-700 present, awesome worship and the word delivered by Gary Burd. A moving “Unity” communion service concluded the morning led by Pastor Kevin McBride. There was a word that came during worship from Pastor Christa McBride that “Honesty” was in the house; Honestly thankful for what the Lord had done in our lives and there were some that was ‘honestly’ about to give up.

A small view of the parade

The motorcycles roared out of the service and was met with a ‘flag line’ to the street. Bikes were ridden to Skooterz where thousands of bikes waited for the annual “Toys for Tots” parade to commence. As long as they held out, everyone that brought a toy for a child at Christmas, a free tee-shirt (1700) and a barbecue sandwich, chips and drink (4,000) was given. Over 1600 toys and $650 cash was received for the Marines to give away at Christmas. The mobile ‘Blood Bank” was on sight to receive donations as well. 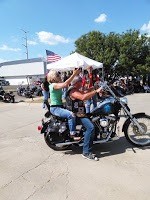 Two surprises this year interrupted the games, first there was a testimony, message of hope given by Pastor Reeder aka Tattoo Priest from Las Vegas, NV and then a brand new semi-automatic pistol was drawn for (not raffled, tickets were free).

The ‘big event’ concluded the day, a Harley Davidson Sportster was given away. Twenty keys were drawn by hopeful participants but only one opened the lock. As we all locked the place up and left totally exhausted, we could do nothing but thank all those that made this event, this summit a total success and give praise to our Lord for His Grace and Mercy that touched literally thousands of lives.

The “Cadillac Ranch Rock Band” entertained the crowd with some good ole music from the 60’s and 70’s. The microphone was then given over to Pastor Kevin McBride who called Gary Burd to the stand, who led us in “Amazing Grace’ and prayed over the crowd. It is always a joy to watch all the folks stand, singing the ole song of praise and hope and receive a touch from our Lord. It never fails to bring some tears down the cheeks of some very rough faces.

Let the games begin, slow race; potato race; boot race; WaterBoard race; and to conclude the day, the ‘burn out pit’ which is always a hit. While the games were going on, hundreds of door prizes were given away as people browsed through the vendors to simply look or purchase a variety of merchandise.