Riding from a Bar to a Church

Sunday, September 25, 2016, 9:45 am, the sanctuary began to fill, most were wearing their black leather, the stage was lined with motorcycles, the air was electric, this is BIKER SUNDAY. The largest day of the year in attendance and fund raising but it must begin with WORSHIP!

Bikers visit from the surrounding area and some rode as much as five hours one way to attend this historic day. There are motorcycle clubs and motorcycle ministries that make this event mandatory participation every year, something the motorcycle culture understands.

The service, led by Lead Pastor, Craig Lawlis, includes enthusiastic worship led by Christian Heritage’s Pastor Greg Sanderson’s team, ranging in age from 10 to 67 years of age. The challenging sermon delivered by visiting USA Missionary, Gary Burd was followed by a unity communion service that had every Biker Patch (the identifying patch worn on the back of their vest) on the stage. Brig. Gen. Dale Hoover led the prayer over the bread and JAG Officer Julie Simoni led the prayer over the wine which brings the message of God and Country to forefront of the congregation. 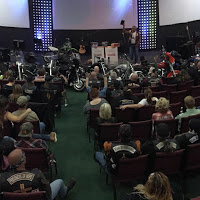 Those who could not handle the fumes and noise were released, the bikes fired up and roared out of the church. The destination? Skooterz Biker Bar! Upon arrival, the crowd was gathering. Yes, somewhere already having their brew inside the bar, the parking lot was full of small talk about the year’s rides and happenings. The hosting radio station had two vehicles with the back doors open and huge speakers cranking out some old rock and roll while Hard CORE M/M members roamed with clip boards in hand to ‘sign the riders in’. The streets were lined for several blocks on both sides with motorcycles awaiting to be fired up to make the ride to the church. This would remind you of the party Matthew threw in Matthew 9:10-11, where the Pharisees condemned Jesus for sitting with the scum. Matthew so desired his friends, many the outcast of society to be exposed to the love and life of his new found Savior, Jesus.

At 1 pm sharp, police lead a parade of 1,300 – 1,500 motorcycles along a route lined with men and women enjoying the shiny iron horses roaring and kids were anxious to get candy, thrown by the riders. Upon arriving across town at Christian Heritage Church, the streets are lined with flags waving people cheering. Several thousand participants in the day were gathered to celebrate and just have a great day of family fun built around motorcycles.

After parking riders lined up for over a block to give their toy for Toys for Tots and get a Biker Sunday tee shirt. While music is playing, the folks line up to get a free barbecue sandwich, bag of chips and a drink all donated by the church, where hundreds of pounds of meat had been prepared by Fred Lerch and crew. The drawings begin for door prizes given, donated by businesses in the area.

The bikes games begin, slow races, potato race, water board race, boot race and the grand finale was the burn out pit where smoke from a spinning tire burning rolled across the crowd. There was a lot of shouting and cheering as the bikers displayed their skills at operating these big beast around obstacles at slow speeds.

People were called to the stage where a “God and Country” message was shared, National Anthem played (people were challenged not to kneel on this property), prayer was prayed and the people sang out Amazing Grace. The air was electric as the voices of 1,500 – 2,000 people sang out both songs. The parking lot was filled with Patriotism and the Holy Spirit filled the crowds heart. People were challenged to “stand up” for our country and commit to a life beyond a casual Christianity. They were offered the opportunity to ‘learn what the Bible says’ about the life they are to committed to as Christians and given the option of church either at Christian Heritage Church on Sunday or Full Armor Biker Church on Thursday, pastored by Mike Carlisle.

A drawing was made where a 40 caliber semi-automatic pistol and a Harley Davidson Sporster was given away. The winner of the motorcycle climbed on her new bike and the husband stood beside her with tears running down his cheeks. 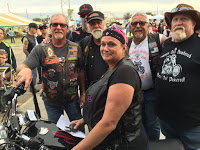 Some may say, why start at a bar? Why have bikes in the sanctuary? Why give a motorcycle and gun away? Why go through all this labor and expense?

The event goes down as a huge success and there can be nothing but thanks to our Lord for His anointing and direction and Hard CORE M/M members and Biker Sunday Committee, led by president, Keith Burd. Christian Heritage Church once again role models being a church that finds unique ways to give to the community to prove our love, by assisting Toys for Tots to meet a cultural need in our area. All come together to bring Jesus to the fore-front of the community.