October 7th, 2016 the rumbling of eleven engines echoing off the paved wet roads during the pouring rain and wind could be heard by anyone who happened to drive by one of the Mission:m25 & Hard Core M/M riders on their “steel horses. These individuals all came from long distances to converge at Journey Church in Siler City, NC for a greater purpose than themselves. The riders consisted of Point-men Gail Glick and Bobby Cepek from the Upper South Carolina Conference who traveled from Pelzer, SC, Rodney McCray from the South Carolina Conference came in from Indian Trails, NC, and Tom Mangum and Melvin McBride drove in from Henderson, SC. Leading the herd of bikers towards Greensboro, NC airport through waves of torrential rain from the hurricane was Mission M25 National Assistant Director, Pastor Mark Richardson. Why would anyone be crazy enough to endure all this hardship on the open road? 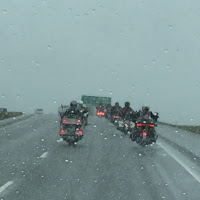 Riding in the Rain

To welcome home a warrior, a hero, Gunnery Sgt. Chris Claude from Pennsylvania had just flown in and deserved an honorable greeting.

Chris and Mark with selected trike

Mission M25 and Pastor Mark have joined forces with Hero Combat Bike Build (www.eaglesup.com) along with our relationship with the Run for the Wall to build this brave war hero a custom trike. SGT. Chris endured life threatening injuries from an IED while serving in Iraq in 2006- which caused the loss of one of his legs above the knee, and permeant damage to his left hand. In great appreciation for his sacrifice for the nation, SGT. Chris had come to pick out one of three bikes/trikes that would be modified to his specific needs, so he will once again be able to get his face into the wind.

The hurricane had brought loss of life, property, and electricity to some individuals of whom were participating in the Cornerstone Conference M25 Annual Summit. The next day, Journey Church moved forward in hosting the conference and the attitude and spirit of those who had ridden in or drove was very upbeat. The schedule held a vast array of uplifting messages such as the presentation by National Director Gary Burd of Battlefield M25 about fighting the Spiritual Battle, and a study about the Parable of the Seed Sower in connection with John 4:35 and the fields of white being ready to harvest. The true battle mentioned it the conference is one of equal rights to share the Christian Faith without being attacked or politically punished. M25 uses good deeds and serving others as a way to let the “Light Shine” (Matthew 5:14-16). 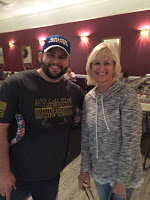 Sunday morning the church gathered at 10am for a special themed service where Gunnery SGT Claude was honored along with other veterans. The entire weekend became about “God & Country”-to take an internal and external stand of faith for God’s Kingdom. Pastor Mark then shared an encouraging illustrated message using his own motorcycle that had been a bike with a salvage title, but now looked like a brand new show bike. He shared that it is God’s Creative Power that made us in our mother’s womb (Psalms 139:13-14), and even when we crash and burn; God would never discard us. He has the ability to recreate us as He did the world during creation in Genesis 1. Pastor Mark also mentioned that the Lord desires to create a GENESIS week in all of us.

Afterwards, it was off to Pittsboro, NC where riders joined us with new toys for the Toys-For-Tots program which was started by the Maries to ensure that children in need receive toys and gifts for Christmas. At 13:00, the bikers roared back to Journey Church, where people awaited them with a chili-cook off, bike games, and a moment of honor for the HERO of the day, Gunnery SGT. Claude. The day ended with a raffle for a custom motorcycle built by Hard CORE M/M of which four people tried to turn the bike on with their key, but only one would be the winner. Dave Schau won the motorcycle since he had the only key that lit the front light and allowed the engine to roar. 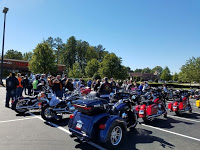 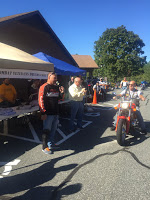