IPHC Serves Run For The Wall

Mission M25 is gearing up to honor our military and veterans for the 19th time on Memorial Day Weekend as representatives for our Lord, His Kingdom and the IPHC. This will be our 18th time to ride / serve on Run For The Wall. 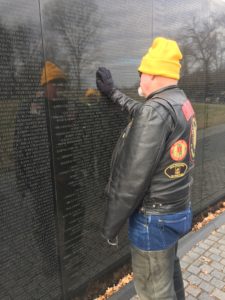 Run For The Wall is a ride that takes riders from Los Angeles, CA to Washington DC on three routes. The ride has hundreds of riders on each route that stop several times a day for ceremonies and meals as they make the ten day journey. The routes can be seen at www.rftw.org.

Mission M25 serves as Hydration (giving away thousands of bottles of water and sport drink and snacks including vegetables and fruit); Chase Team (pickup trucks with trailers following the pack to pick up broken or wrecked bikes); Chaplains (Chaplain Corps is there for the wreck / breakdown to assist the individual including going to the hospital); Senior Chaplains (Leader of the team, responsible for the prayers to start each morning and a Sunday morning church service) and Missing Man and Platoon Chaplains (responsible for specific spiritual assistance).

The M25 team will include eight pickups pulling various types of trailers and approximately 20 motorcycles with a team of 35-40 men and women. These are not all IPHC ministers but most of the personnel come from our churches, including Pastors, Leading Laymen in the churches, Conference Bishops and National IPHC leaders.

The effort was birthed from the heart of Gary and Carolyn Burd as they stood on a rainy street with a soldier killed in the Iraqi war. They stood, along with about 30 bikers, as the Lead Pastor of Westboro Baptist Church, holding a placard that said, “Thank God for IED” (Improvised Explosive Devices) and screaming “AMERICAN FAGS COMING HOME IN BODY BAGS”. This event ‘drove’ the heart of these two leaders to make sure Westboro Baptist was NOT the ONLY church out there. May I quote “Silence in the face of evil is evil itself. God will not hold us guiltless. Not to speak is to speak. Not to act is to act.” Dietrich Bonnhoeffer.

In 2004, Carolyn and Gary took three WWII veterans to Washington DC for the unveiling of the WWII Memorial, one was Carolyn’s father. A man hardened by war and a hard life. For the first time he wore his Veteran’s cap. Riding in a wheelchair, due to the injury he sustained in war, people stopped, thanked him and asked for his signature, tears ran down his face. They knew at this point they had to dedicate their lives to healing the men and women who kept us in a nation where we could freely worship God.

The event that sealed it all up was the man who approached Gary in a parking lot of a Veteran’s Hospital asking, “I served in three wars. Didn’t I fight for the Freedom of Religion? Where is the church that thanks us?”. Gary looked him in the eyes filled with pain and apologized but promised he would give his best to change that.

Gary and Carolyn and the entire M25 team thanks the IPHC for basically funding the route. May the Lord bless you and our church for stepping up and stepping out.

You can assist this dedicated team of men and women who give up vacations, income and family time by placing your name on our banner. You can give by texting POWMIA to 71777 or you can send a donation to Mission M25, POB 30309, Amarillo, TX 79120.