Celebrating it’s 99th Anniversary, Crow Fair, is the largest PowWow in the USA. With approximately 1,500 tepees, Native Americans coming from all over the USA and Canada, also many visitors come from as far as Europe. The PowWow goes from August 17 to August 20, it includes a rodeo, competitive Native American dance and dress, as well as an array of other events.

M25, with financial assistance from Acts2Day Ministries of EvangelismUSA, provided two meals on Saturday, breakfast and dinner. Dinner on Saturday is the traditional steak night, which draws a large crowd of attendees, normally feeding around 400 people. M25 also provided assistance with meal preparation and serving in the concession stand after service on Friday night.

M25 also served the PowWow by cleaning up around the arbor on Thursday, Friday and Saturday. This is no small task, as it is necessary to pick up as many as eleven large bags of trash during one round of cleanup. It is at the heart of the M25 team to work, preparing the soil of hearts by serving with pure love. No agenda, just love being expressed. M25 attempts to live “BALNAM”, Be A Light Not A Mouth, in every setting we are invited to serve. 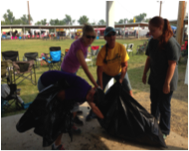 M25 operated a booth where free tickets for the War Horse Give-Away were handed out to any Native American over eighteen years of age. On Saturday night after the “Grand Entry”, Gary Burd, Pastor Rick Haug, Dr. Russell Stands Over Bull and M25 National Board Member, Danny Stewart, accompanied by his wife Glenda, walked on the “sacred dance floor” (a carpet of manicured grass). They shared the opportunity of picking the recipient of this year’s beautiful Pinto Paint Horse. Living Word PHC of Maiden, NC children’s ministry was given the task of naming the horse; they chose “Oreo”. Oreo captured the heart of so many people, one even told us his wife wanted the horse, stating, “name your price”. Oreo, with head held high, was led around the arena as the Native Americans played the “gift” song on the war drums. It was very moving to watch the crowd get quiet and prepared to receive the horse drawing.

Gary Burd gave instructions for the drawing, Dr Stands Over Bull shared the Gospel and the horse was given. Once again, a family whose father has physical complications and could not purchase a horse for his family, received this beautiful animal. As non-Native American’s, it is difficult to fully understand the value of horse ownership and the impact this gift can have! The family had been praying all day to receive the horse. As we parted, a prayer asking God for many years of joy from this animal was prayed and the Lovan Plain Bull family assured us Oreo would be well cared for. 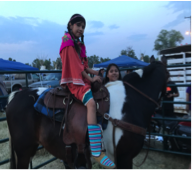 Pictured: Lovan Plain Bull with little sister in the saddle.

Once again, we feel blessed to see our gift be directed by the Holy Spirit and we trust Crow Fair 2018 will be another great year of serving and loving this, often, overlooked, neglected and abused people.