M25 has a team that lives by the protocol of ‘adapt and overcome.’  Quitting is not in our vocabulary!  This is a team that knows how to fight the odds to take a positive stand against a sin that must be dealt with in this nation, abortion. The most miles ridden was by Pastor Jason Cook, 6822 miles, and the longest time from home and family was Herman Strickland, thirteen days! The riders were “all in” despite personal concerns: ARod aka Rodney McCray suffered with a terrible limp from the time we started; Herman Strickland, the loss of a sister-in-law; Jon Potter, his sick wife; Jason Cook, concerned over families due to the impending hurricane, and Jerry Plent who is a small group leader, stayed on course even after knowing his pastor committed suicide, 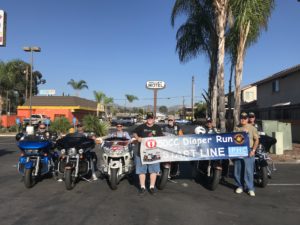 The 50CC Diaper Run is a coast to coast motorcycle ride in less than 50 hours with the task of collecting diapers and baby wipes and cash to support pro-life efforts. It is an extreme ride done to support girls who chose not to destroy the life inside of them.  The Diaper Run is blessed and supported by Royal Home Ministries (a pro-life home in Falcon NC); Falcon Children’s Home (a home for troubled children), Falcon Christian Academy (where the girls can finish their education), and the Iron Butt Association (an organization that credits our riders with an achievement patch and certificate). The ride is organized by Mission M25 under the blessings of the International Pentecostal Holiness Church.

This year we rode from San Diego, California to Jacksonville, Florida for a total of 2,456 miles in 46 hours & 34 minutes!  We collected 224,379 diapers & baby wipes and $9,149.00 in contributions. We are not finished yet! The following conferences are yet to have their donations counted: Cornerstone, North Carolina, and the South Carolina Conferences, plus the Sonshine Network Ministries. It is my assumption at this time, we will exceed 300,000 diapers and baby wipes.

What will Royal Home Ministries (RHM) do with that donations?

Highlights of the journey: 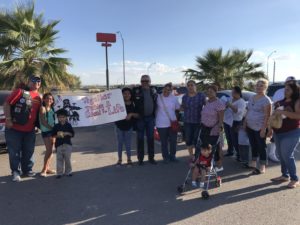 The rally in Fresno, CA was full of life and approximately $2100 was raised plus thousands of diapers and baby wipes were collected.

Our team have all arrived home safely and were blessed to be included in such a wonderful stand for an awesome cause.

We would like to thank all who gave, who will be giving (our rallies in NC are re-scheduled for November and SonShine Conference will bring their donations to Falcon in November), and all who supported this great effort with your presence. 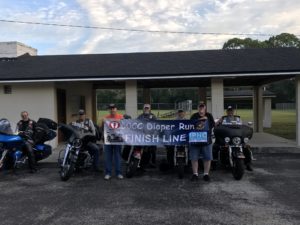