Ride for Solidarity for Israel 70, Jewish and Christian Riders from Israel / Romania (Max Katz has a home in both countries), Arizona (Gene Adee), Colorado (Dan Sifford), Texas (John McVey and myself), Jon Potter (Virginia) and Washington (Dan Smith) rode from Santa Monica Pier in California to Chicago, Illinois, on Historic Rte 66 and then to New York City. The mission was to stand together in celebration of the freedom of Israel for 70 years.

The riders endured high winds, many days of rain and one morning pulling out with three inches of snow on our bikes; a snowstorm so bad we could hardly see.

The ride was met with so many people expressing appreciation, giving thumbs up (our bikes displayed Israeli and American flags), and even offered to donate money.

Men who did not know each other (I was the common denominator), riding together for 15 days, sharing motel rooms, meals, and resources. Each having a different riding style chose to ride for a MISSION! Each man laid down his desires and preferences to complete this effort.

Why the ride: to stand in solidarity with Israel. We were there to express our stand with God’s chosen people and their land. The idea of a “MISSION” was made very clear early on and was embraced by the riders.

Each morning we had a ceremony, the pledge to the American flag and then to Israeli flag; then a prayer (alternating Hebrew and Christian prayers). It was so good to stand in front of the world at motels across the USA for all to see.

When completed the first leg at Route 66 in Chicago, two of the men had to return to their homes. Five of us continued toward New York City.

Brandon McCray, a huge supporter of M25, brought his son, Tyler and Pastor, Scot Caley to Lima, Ohio, and escorted us to their church, Park Christian Church, for an Israeli prepared meal and celebration. They will never know what a shot in the arm the open doors and hearts were to our team.

Arriving in Belpre, Ohio, the local Christian Motorcycle Association hosted pizza and desserts at Celebration Center. We were so blessed to have a dry, warm spot to eat and the openness to hear the story of our mission.

The next day it happened; the synagogue shooting in Pittsburgh! Wow, here we are, riding for the sake of Israel. The rain, the cold, the weary bodies became secondary to the Mission. The Mission was solidified. Our lone Jewish rider was visibly shaken! We were broken! Max’s expression was more like, “again”. It was not like shock; it was something like, “here we go again.”

We stopped and made a video to express our pain and to encourage people to take a visible stand for Israel. This was a very emotional time and people in the restaurant were so supportive of our efforts that day.

Upon arrival in New York City, riding our motorcycles to Ground Zero (a real risky undertaking), we were blessed to find a place to light eleven candles for the Jewish people who died from this tragedy.  (These videos and pictures from the ride are posted on our Facebook page, Ride for Solidarity with Israel70).

There are so many awesome things to report on this historic ride, but I will bring this to an end by calling us to action, ‘wake up the mighty men’ of Joel the prophet. We MUST do something.

Max, the Jewish rider stated with as much emotion as possible, his thanks to our riders. He stated, “Most people will stand with Israel from behind their computer.” So many will write articles that ‘friends’ or people with like attitudes will read.

This morning, I read Hugh’s News where to summarize Dr. Michael Brown, a Pastor with Christian / Jewish members did not say anything about the synagogue shooting because, ‘he does not bring things that are political to his pulpit’. Wow!

Let me share a thought from one of the Holocaust Museums we visited:

First, they came for the socialists, and I did not speak out

– Because I was not a socialist

Then they came for the trade unionists, and I did not speak out

– Because I was not a trade unionist.

Then they came for the Jews, and I did not speak out

– Because I was not a Jew

Then they came for me

– Then there was no one left to speak for me

What shall you do? 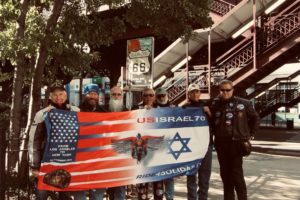