Less than 1% of the residents on the Native American reservation are Christians. Because of this, they are classified statistically as an “unreached people group.” And yet they are on American soil: soil they once owned that was taken from them with blood and lies! Today, reservations have the highest poverty rates, the highest suicide rates, and the highest school dropout rates in America. The infant mortality rate is 800% higher than anywhere in the U.S., the suicide rate among children is at such a high that in 2014 President Obama declared a state of emergency for Native American youth. The average life expectancy at Fort Belknap reservation in Montana is only 59 years old. A great injustice that must be reckoned.

In August 2014, Mission:M25’s heart was broken for these wonderful people on Hoka Hey Motorcycle Challenge aka HHMC. HHMC is a motorcycle ride of 10,000 to 14,000 miles on back roads with no motel stays or showers–a grueling ride to remember the plight of the Native American on the Trail of Tears and other marches. Every HHMC since 2014, Mission:M25 has presented a patch to those who make the ride. While on the ride, our hearts were broken for the Native American.

Under the encouragement of Pastor Paul McElroy of Mountain Family Fellowship, in Helena, Montana, M25 began going to the largest Powwow in the U.S.–Crow Fair. Located just off Interstate 90, Crow Fair is just a few miles from where Col. Armstrong Custer was defeated at Little Big Horn. M25, with the assistance of Living Word PHC in Maiden, North Carolina, and Pastor Rick and Beverly Haug, began giving a horse away during the dance on Saturday night. After two years, a decision was made to move to Hays, Montana, and work with Montana Indian Ministries.

In 2018, M25 took twenty people to assist in the Powwow by offering water, Gatorade, our labor of picking up trash, a children’s craft tent, and by giving a horse away. Pastor Bruce Plummer was very open and welcoming to the concept of adding a horse and children’s craft tent to 13 years of picking up trash and giving coffee and water away. Pastor Cory and Jana Jones of Emmanuel Mission in Lake City, South Carolina, had received a donation of a tractor/trailer rig from the South Carolina Conference and his boss, where he was employed as a concrete truck driver. Pastor Jones decided to join M25’s effort by bringing 12 people along with the trailer loaded with Bibles, water, Gatorade, and other supplies.

During Pastor Cory and Jana’s visit, already broken by the Holy Spirit to the need of reaching the Native American, God stirred their heart to not only return next year for the Powwow but to move their family to Montana to work with Pastor Plummer on the reservation. Of course, timing was an issue, they felt the urgency to go, yet they had a pastorate to consider and three children. The war inside continued, trying to find the perfect timing of the Lord. 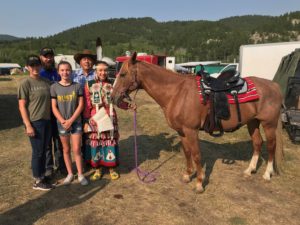 Acts2Day Ministries, under the encouragement of Bishop Garry Bryant, assigned the Jones’ as missionaries to the Native American. The South Carolina Conference, with encouragement from all three leaders–Bishop Greg Amos, Rev. Dean Morgan, and Rev. Morris Smith, decided to make it a reality for this young couple and family to fulfill this commitment.

This year, 2019, our driving conviction is, “We Prayerfully Value Justice”, and if there is ever a good time for the IPHC to join the efforts of reaching a nation of people, it is now!

Rev. Billy Graham prophesied in 1975 that the next great revival would come through the Native American. It has been followed by many spiritual leaders over the past 20 years agreeing the Native American would be the least of these that the Holy Spirit would use to usher in His next move in our country. We are excited to have ministry seed invested in this possibility.

On Thursday night, January 10, 2019, at the EVUSA Leadership Meeting in Oklahoma City, Oklahoma, there was a time of sharing. Pastor Jones got up to share his heart on the timing of God and referred to an article written in 1918 in our Advocate. Later, Presiding Bishop Doug Beacham shared how a woman in Wolf Point, Montana, talked about being all alone with no Christians around her, and how we had to move to minister to the “invisible people” of Montana. Pastor Jones shared how he had received a newspaper article from the pastor in Montana, written recently, 100 years later, on children committing suicide entitled, “I feel invisible.” Once asked what it would take to get him to Montana, he reluctantly admitted it was the money to survive. He, a white man, will live on the reservation which is unheard of. He will travel to three different reservations in North Eastern Montana, staying in an RV and ministering to children. Pastor Jones had been offered a church with a parsonage on the reservation, but he and Janna could not let go of their commitment and brokenness for children.

The Jones’ need $2,000 to pay their bills each month. With the poverty rate and lack of industry in remote areas, finding employment is very difficult. A spirit of giving and commitment began to move in the meeting, and over $2,700 a month was raised in about ten minutes among men and women from around the country. Cory and Janna will now travel to New York City, New York, to work with Metro World Child for a week to sharpen their skills to reach children in difficult circumstances. 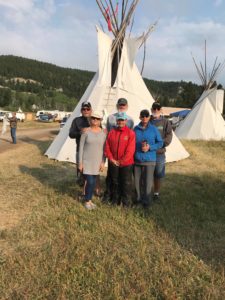 Please know this will take care of the basic needs of these young missionaries, but there is a need for fuel to travel from reservation to reservation, plus other ministry needs to reach those living in dire hopelessness that plagues the Native American.

You can give at:

Or send your check payable to: