Hurricane Florence took a toll on the Carolinas in September 2018 and having the mantra for life, “Posse En Da Nihil” (Inability to do nothing) Mission M25 could not look with sadness and go on about business as usual.

We began by canceling our traditional East Coast Summit in Siler City, NC October 6. Then in consultation with Pastor Mark Richardson, we decided it was best that I stay in the Wilmington area and see what we could do for the struggling victims, instead of riding to Siler City for something that is dear to my heart, Biker Sunday and Toys for Tots. During the week preceding the Summit in October, Pastor Mark led a group of men in cleaning out 23 homes, including calling his church to arms, three hours away, loading up on Sunday morning before the sun came up and traveling with 22 people from his church to help the people in desperation. 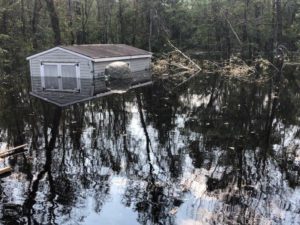 We analyzed our schedule, what was most important, the man in the ditch of despair or our meetings of training. We then decided to cancel one of my favorite things, Knights Training, in the Cornerstone Conference and asked Knights to join us in the labor and BE a Knight rather than sit in a class room and study being a Knight.

We began to gather a plan under the guidance of James Elliott of Compassion Church in Wilmington NC and Pastor Mark Richardson to ‘strap on the tool belts’ and get in the ditch with the poor beat up man robbed of his possessions and near death (despair on the faces of men and women seemed all hope was gone, a type of death). We would do this by putting down new flooring, installing insulation, sheet rock and putting the first layer of tape and mud on the walls.

On November 2, men (two women) joined together to begin the restoration of one church and six homes over a six-day plan. We were blessed by Compassion Church in Wilmington to headquarter in their church. This meant, turning the sanctuary into a bunk house, full of cots and air mattresses, classrooms into bedrooms and the kitchen into a place to share meals. The washing machine and dryer was such a blessing, as we came in at night as dirty as we could be.

We were blessed by

We witnessed firsthand the coming together of different ministries to assist the restoration of homes and hope among people of the IPHC and people with no church affiliation.

On Sunday, November 4, the entire team of people attacked the Trenton Pentecostal Holiness Church in Trenton, NC, with a determination to get all the sheetrock put up and the first coat of tape and texture put on. In some eleven hours of ‘fighting it’, the team loaded up, tired, sore, dirty and excited to have accomplished such a task. Victory was our battle cry.

Briefly some of the take-aways: Watching the countenance of an 89-year-old pastor and his associate light up when they saw the sanctuary walls and stage put back together made us feel good about our aching bodies from the eleven hours of pushing ourselves to get it completed.

Seeing the tears run down the face of an injured veteran with the loss of hope in his home being restored when he saw the lights come on and all the sheetrock hung in place and the joints and nail holes covered, was worth its weight in gold.

Working while the homeowner’s father, who had been trying to restore hope to his son in despair, go around and pat you on the back, over and over and then seeing the tears flow as the first bedroom was sheet-rocked was enough pay for anyone.

Gathering as a group and uniting in prayer over the homeowner as we departed and sensing the Holy Spirit’s move on everyone’s heart was so life giving.

Having a young man in high school get permission to miss classes and join his Father, Pastor Tony Martin on this mission gave us so much hope of our young people. His school allowed him to go, if he journaled his activities each night.

Mission M25 was blessed to have DRUSA deploy the trailer given to Pastor Cory Jones by the South Carolina Conference, a M25 leader, to Florida. The trailer was used for housing and showering for the Mobile Feeding Kitchen while they were feeding the residents beat up by Hurricane Michael. 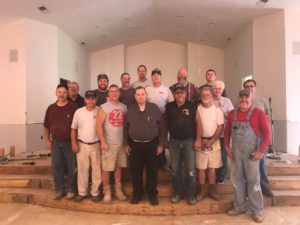 Mission M25 looks to come along side ministries, social endeavors and humanitarian efforts to help people needing hope and assistance. We have learned there is no substitute for a hands-on touch, an email, text or phone call is good, but it will never take the place of a human touch. Associate Pastor Stephen Austin declared the physical touch gave him hope at one of his darkest moments of hopelessness after losing everything his family had in their home and the destruction of his church.

The scripture teaches us that Jesus was moved with compassion as he saw the sea of lost and hopeless humanity. Rev Marysol Martinez adequately described the difference in sympathy and compassion on Monday night, November 12 at the Life Rally to end our 50CC Diaper Run for 2018. Sympathy is feeling sorry for someone in the ditch, but Compassion is going and doing something about the pain of the man in the ditch (my interpretation). While money is always needed and so appreciated, it is no substitute for getting in the ditch and helping the individual. Sending supplies is not the same as going and placing your hand on a man’s back, helping him pick up his belongings that have turned to trash and spending time with him. It takes no gifting of construction to pick up trash, pull sheetrock off walls and dig out the damaged insulation, only a broken heart to love and serve people who have lost all their earthly belongings.

It is my prayer that the church will become more focused on being the church rather than going to church.

May we see these tragedies as an opportunity to be a light in the midst of darkness.

May we understand Matthew 5:16 – “In the same way, let your good deeds shine out for all to see, so that everyone will praise your heavenly Father.” People want to ‘study’ driving out evil, may we remember, ‘light dispels darkness’. Turn on the light and darkness has no choice but to leave.

M25 stands grateful for the opportunity to live out BALNAM (Be A Light Not A Mouth) one more time.