“Dr. Vinson Synan remains the foremost historian of the International Pentecostal Holiness Church and one of the top historians in global Pentecostalism. His contributions to the global body of Christ, as well as to the International Pentecostal Holiness Church, are incalculable. His intellect, humor, and commitment to Christ remain an inspiration to all of us. I am personally honored to have been one of his students when he taught at Emmanuel College. He continues to influence my life and many others.” 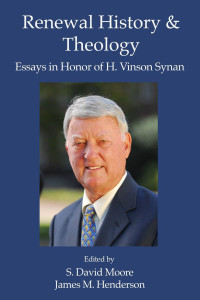 Dr. Synan was born in Hopewell, Virginia on December 1st, 1934 into the home of a Pentecostal Holiness pastor and denominational leader. His father, Bishop J.A. Synan, served as IPHC General Superintendent from 1945 to 1969. Vinson Synan attended Emmanuel College in Franklin Springs, Georgia, and continued his education at the University of Richmond, Richmond, Virginia. In 1960 he married his wife Carol and later completed his M.A. and Ph.D. from the University of Georgia. During these years Dr. Synan taught at Emmanuel College and was a successful IPHC church planter. Over the next decade, he became the General Secretary of the IPHC, while also teaching at Southwestern College in Oklahoma City. Dr. Synan also served as an Assistant General Superintendent of the IPHC from 1977 to 1981. He served as the IPHC Director of Evangelism from 1981-1985. During the early 1990s he was the Director of the Holy Spirit Research Center on the campus of Oral Roberts University. In 1994 he became the Dean of Regent University’s School of Divinity and completed that assignment in 2006. Today Synan serves as a professor and is Dean Emeritus of Regent University. 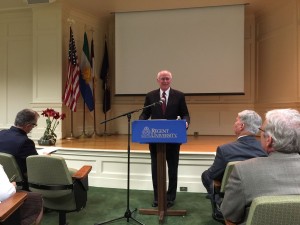 Dr. Synan is one of the leading authorities on the history of Pentecostalism. Writing and editing more than 18 books in his lifetime, he has contributed works such as The Holiness Pentecostal Movement in the United States, The Old-Time Power, and his most recent major work, The Century of the Holy Spirit. In addition to these publications Dr. Synan released his memoirs titled An Eyewitness Remembers the Century of the Holy Spirit in 2010. His work and writings are authoritative resources on the history of Pentecostalism and various other topics in the church. In addition, he was one of the founders of the Society for Pentecostal Studies (SPS) in 1970.

To honor Synan’s Pentecostal contributions, a Festschrift Celebration was held at Regent University on December 1st, 2014. This event included remarks by M.G. “Pat” Robertson who said “Vinson Synan is a leading scholar on the Pentecostal and Renewal movements, I thank the Lord for you, brother; congratulations on this honor.” 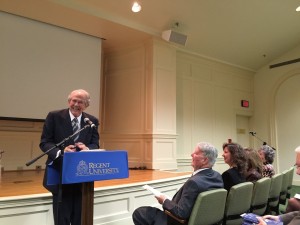 Other remarks were made by former students and faculty colleagues. The Festschrift is titled “Renewal History & Theology Essays in Honor of H. Vinson Synan” and was edited by S. David Moore and James M. Henderson.

Dr. Synan responded to the Festschrift by stating “You don’t know what this book means to me. I thank God for Regent University, that we can take part in this movement,” said Synan. “And thank God that He is still moving in the world today.” 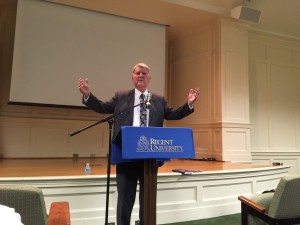 As honor is given to Dr. H. Vinson Synan a reality sets in that brings a realization of the dedication, focus, and support that has been invested in the history of the Pentecostal movement. This work for the kingdom of God continues to be carried forth by Dr. Synan and other dedicated individuals in the ministry. He has been making a lasting impression on so many lives through his work, ministry, and record of history that will be referenced as a definitive resource now and in the future.