As members of the IPHC gather for the Fifth Global Assembly in Hong Kong this week, we are welcomed to a thriving global city, which is the home of Wing Kwong Pentecostal Holiness Church. We are thankful for the spirit of excellence and warm hospitality Rev. Donavan Ng and the leadership of the Wing Kwong Church have extended to the global IPHC family for this special occasion.

The history of the Pentecostal Holiness Church in Hong Kong is rich and deep, with the first missionaries arriving in 1907.  As we reflect on the following brief history that was included in the program for the Fifth Global Assembly, we honor those that have sown seeds into this deep and fertile soil:

With the Pentecostal Holiness Church in its infancy in the early 20th century, the Holy Spirit began to draw missionaries to Hong Kong. While visiting Azusa Street, T. J. McIntosh felt compelled by the Holy Spirit to go to Macau, a Portuguese island west of Hong Kong; he arrived in 1907. McIntosh quickly began to share the Pentecostal message and Chinese believers visited his house late into the night to pray for the baptism of the Holy Spirit. McIntosh worked closely with Chinese national Mok Lai Chi.

In 1909, Anna M. Deane, an educator from New York, was led by the Holy Spirit to move to Hong Kong. “Aunt” Deane began working on Caine Road in the central section of Hong Kong and eventually opened a kindergarten and school for young girls. In 1913, she was joined by her 18-year old niece, Anna Deane Cole, who became the youngest missionary to China. The aunt-niece team moved to Shaukiwan on the eastern end of Hong Kong overlooking the harbor, where they opened the Wing Kwong (meaning “eternal light”) school and established the Shaukiwan Church. From this early beginning, the work in Hong Kong was committed to developing schools. Miss Jane Schermerhorn joined the team in 1914 and served as the principal of Wing Kwong School until her death in 1937, when Mavis Oakley assumed the role of headmistress.

Jane Schermerhorn was a devout intercessor who prayed for the Lord to send a national missionary to assist with the work. In 1918, God sent Mung Sau Ling and his family from the mainland who began ministering among the boat people. In six years, the Shaukiwan Church grew to over two hundred believers.

In 1919, William H. and Orvine Turner, accompanied by Talmadge H. Rousseau and his wife, arrived in Hong Kong and ministered among the fishing villages. Rousseau eventually helped purchase the first 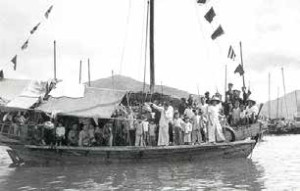 Pentecostal Holiness property in Hong Kong. In the first session of the China Conference on April 27, 1923, the assembly placed Rousseau in charge of the work in Wanchai and Shaukiwan. In 1924, Ms. Anna Dean Cole organized the construction of the Gospel Boat which became the center of Pentecostal Holiness ministry before the war.

W..H. Turner also had a heart to minister on the mainland. In 1924, he and his family moved to Pakhoi, where they purchased property and launched a school for girls, and later a boys’ school. They were joined by Laura Hylton and Julia Payne. After enduring many dangers and hardships, the Turners returned to Hong Kong and began working in Shaukeiwan, Ap Lei Chau, and Stanley. Three months following his return, Turner baptized 23 adults and dedicated 35 children. A spirit of revival broke out among the land and boat people and each mission station experienced a mighty move of the Holy Spirit. The Shaukeiwan church grew to about 1300 members during this time.

Rev. and Mrs. G. C. Legge, Ethel Strickland, Anna Deane Cole, and Mung Suii-laan were pioneers in the Shau Tau Kok fishing village on the border of Hong Kong and China. This work expanded to include a Bible school and church. Later, Rev. and Mrs. C. H. Herndon assumed the oversight of Pakhoi, Yam Yuen and the church and school at Mui Luk.

At the China Conference of 1938, the missionaries felt that Turner was needed in Japanese-occupied Shanghai. After much prayer, Turner and his family left for Shanghai, where he began conducting services in homes and boldly taught about the baptism of the Holy Spirit. The Lord opened doors for Turner among influential leaders in the community and he was given favor to minister in local hospitals and pray for the sick. The work continued to flourish and in 1938 a partnership was formed with Apostolic Faith Mission to organize a Pentecostal Holiness Church. From this mission, the foundations for five churches were laid.

The work in Hong Kong continued during the war and God raised up indigenous workers such as Mr. Wang and Mother Mung to assist with the ministry. When the U. S. government mandated the evacuation of all American citizens, most of the missionaries left China, however a few remained. C. H. Herndon was imprisoned during the war, but was later released. Rev. and Mrs. Turner were interred in a concentration camp outside of Shanghai and were later exchanged for Japanese prisoners of war.

Although the Pentecostal Holiness Church saw the close of the Pakhoi and Shanghai stations during the war, the surviving national workers began to rebuil. Dorothy Mung reopened the Wing Kwong School in December 1945 and missionaries began to return to Hong Kong in 1946. The Rousseaus, Herndons and Anna Deane Cole returned with Sybil Rousseau and Eleanor Deane Cates. In the fall of 1947, Mavis Oakley and Ethel Strickland returned with Leona Causey. During this time, Pentecostal Holiness missionaries met Rev. and Mrs. Harry Glass, who became faithful leaders of the work in Hong Kong. Two new properties were purchased and the work was gradually rebuilt, only to face another evacuation during the Korean War.

Following the Korean War, Rev. Henry Glass was appointed as the new superintendent of the Hong Kong Conference. Under his leadership, Mr. and Mrs. Kenneth Locke established a work in Tin Waan. A new property was also purchased in Kowloon Tong for the conference headquarters. With a continued focus on education, the new Wing Kwong Primary School was dedicated in 1958 by Superintendent Glass. The work in Hong Kong continued to grow and by 1959, twenty-one mission stations were established. The Glass family left for furlough in 1961 and did not return to Hong Kong. Rev. Princeton Cates was appointed as the new superintendent.

In 1959, Fannie Lowe, the first medical missionary to Hong Kong, joined the missionary force and worked to raise the funds and establish the Murphey M. Burchell Scarboro Clinic. Leta Dantzler, Dr. Paul Chang, and Dr. David Poon later joined the medical team. The clinic was used to provide health care and spread the gospel. The Tsz Wan Shan Church was birthed in the clinic waiting room and was later moved to the Wing Kwong Primary School.

In 1969, Superintendent Cates held a groundbreaking ceremony for Wing Kwong College, where John and Norma Jean Burnette served as the first principal. The college quickly established a strong reputation and gained favor with authorities. In 1969, they received a grant from the Hong Kong government to establish a primary school in Tsz Wan Shan. Later, the Bostic Center for the Blind was established in the same location. By 1970, there were over 3,000 students under Pentecostal Holiness supervision.

In the early 1970s, Hong Kong saw new missionaries such as Dora McNeill, Carolyn Foster, Garner Dillard, and Rev. and Mrs. Sherrill Orvin. In May 1974, Orvin began conducting services for students and faculty in the auditorium of Wing Kwong College and eventually became the founding pastor of Wing Kwong Church and superintendent of the Hong Kong Conference. In 1975, John Parker assisted in establishing three theological training centers to equip national leaders. History was made at the 1976 Chinese Conference as the entire conference board was elected from the Chinese constituency. This was the beginning of the indigenization of the work in Hong Kong. By 1997, the IPHC in Hong Kong was fully led by nationals. Their wise and generous use of resources is a powerful testimony to the global IPHC.

In 1978, Donovan Ng Shan-ho became the pastor-in-charge of the Wing Kwong Church with 28 members. The Lord blessed the work and by 1997, five services were being held in the Joe Campbell Hall of Wing Kwong College and additional space was needed. Ng petitioned the Lands Department to secure a property in Lok Fu for religious purposes. After five years, the Planning Department granted Wing Kwong Church approval to build. At a cost of $15.4 million, this was quite an undertaking for the church. Choosing to rely on the principles of tithing that had been taught since the church’s inception, the leadership took a leap of faith to finance the building without assistance from the American church. Throughout the years of construction, the church never wavered in its commitment to World Missions projects. In 1999, when the building was nearly completed, the Wing Kwong Church gave $19,200 to World Missions projects in addition to monies given for the Global Outreach Offering.  The construction of the Wing Kwong Church was completed in 2000 with over four thousand members, making it the largest Pentecostal Holiness congregation at that time.

Today, the IPHC in Hong Kong has grown to 15 congregations comprising 3 conferences and 13,314 members. Their commitment to World Missions Ministries and the global IPHC remains strong. In 2006, the church sent Iris Chau and Matthew Wong to Nairobi, Kenya to pastor the Chinese people. In addition, church members have participated in various trips to different mission fields, including Cambodia, Malaysia and Thailand.