On the second day of the IPHC’s Global Assembly in Hong Kong, speakers from Botswana, Canada, India, Romania and Turkey told delegates that their mandate from Jesus Christ is truly a worldwide mission. The attendees were also reminded that the task of reaching the nations with the gospel cannot be accomplished without a fresh anointing from the Holy Spirit. 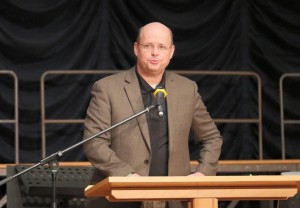 Later that evening, when more than 1,200 people crammed into the Wing Kwong PH Church for a celebration service, an unexpected guest announced that China will likely lead the way in world evangelism in the future. “God has entrusted to the Chinese church a special mandate for the 21st century,” said James Hudson Taylor IV, the great-great-grandson of British missionary Hudson Taylor, who ventured to China in 1865 to launch the China Inland Mission. Taylor reminded the audience that the seeds sown so long ago are now producing an unprecedented spiritual harvest in the world’s largest nation.

“The Great Commission needs to be completed by the global church, across denominational lines,” Taylor said, noting that his great-great-grandfather recruited missionaries from many denominations to reach China.

An international flavor marked each of the day’s sessions, especially in the afternoon when Rev. Timotei Bulzan from Oradea, Romania, closed his message by asking representatives from every continent to come to the stage and pray for the advancement of Christ’s kingdom in their native language.

Other highlights of the day: 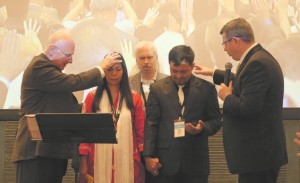 In the evening service at Wing Kwong Church, Turkish church-planter Ismail Serinken shared how he found Jesus Christ as a Muslim—and how his own parents had a powerful encounter with Christ after they heard his testimony. Today Serinken is planting churches in Turkish cities where the gospel once flourished in the first century. “Even radicals are being saved,” Serinken said, adding that he believes a great revival will sweep the Muslim world before Jesus returns.

At the close of the evening service, Sharon Wooten, an IPHC missionary to Africa, delivered a powerful challenge to each delegate to seek God for personal revival. “We need to tarry for the power,” she declared, “and the power only comes through surrender.” Wooten said a return to Pentecost—and to deep intimacy with Jesus—is the only way we can fulfill our global mission.